Tom Quimby, CCJ senior editor
Sep 19, 2022
Container Port Group saw a surge in drivers during the second quarter which they credit to a new driver app and a new compensation strategy that rolled out at the end of the first quarter. “One of the first things we did was conduct a comprehensive audit of our driver compensation," said CPG Vice President of Driver Experience Jason Schmelmer. "Based on those findings, we adjusted our compensation approach to help us stand out. We now offer a top-of-the-market compensation package for drivers. Combined with our Discount Marketplace and access to DrayPal, our custom mobile app for drivers, we have compelling reasons for owner-operators to apply here.”
Container Port Group

Ohio-based ContainerPort Group (CCJ Top 250, No. 81) is crediting a surge in driver headcount, in part, to a new app that offers deeper visibility into how its drivers are paid.

A 20% increase in CPG’s owner-operator network during the second quarter lifted their drayage driver count to more than 1,300—a sharp uptick from the first quarter that CPG President Joey Palmer credits to an increased focus on driver sentiment.

Driver feedback paired up with a deeper dive into technology led to the development of CPG’s DrayPal app as well as a new analytical pay model that assesses pay scales in various markets to help determine when drivers should get a bump in pay.

Changes frequently start at the top and that was the case at CPG where earlier this year Palmer approached then-Vice President of East Coast Operations TJ Frye with the opportunity of taking on the newly minted position of Vice President of Business Innovation. Frye took on that role in spring.

“This goes into the investment that we're putting behind being more innovative and really being more forward thinking about technology platforms,” said Frye whose background includes a five-year stint in IT.

“I told myself I would be helpful here,” Frye continued. “It's an exciting opportunity to see where technology is today and take my last 12 years of operations background and pair it up with the opportunity that we have to really do generational leaps forward with our technology platforms to serve our current driver, our IT based driver community, our partner carriers for our logistics and brokerage division.”

CPG rolled out DrayPal in spring. CPG drew on driver input and the expertise of software engineering firm Headstorm to create the app which offers drivers quicker and greater control over matters pertaining to work and pay.

While it’s handy getting reminders about medical cards and CDLs, drivers are more impressed having instant access to work-related finances and revenue goals.

“One of the primary features that is very exciting for our drivers is that it shows them their settlements and allows them to set weekly goals,” said Jason Schmelmer, CPG’s vice president of driver experience. “They can monitor their progress with those goals. It's something that before they would do on their own. Now we've given them a platform to try to achieve certain goals and see if they can get better and better each week as far as generating revenue.”

Prior to the app, settlements were issued on a weekly basis through email, which cost drivers and CPG staff time and money.

“When you're doing transactions through email there's a lot of overhead,” Frye said. “The drivers had to make assumptions on how the process was going and the same with us. If there's any issues like collecting paperwork and those sorts of things, it becomes a very manual phone-driven process that takes their attention away from trying to produce revenue on that next load and get through whatever problems they may be facing or even off of being focused on getting up and down the road safely because they're concerned on not getting paid for a load.”

While for its recent phase one roll-out DrayPal was tooled to focus on financial visibility, Frye said the app may soon include push notifications going out to drivers regarding “return locations for empties, chassis return locations and pickup points.”

CPG driver Reese Burnside, who’s been behind the wheel for nearly 21 years, is a big fan of the app.

“It's wonderful,” he said. “It's a tool that I wish came out a long time ago because for independent contractors, you want to see what your settlement's going to be. You can gauge your finances. It’s a tool that allows you to see exactly what you're making as you go along during the course of the day and every day.”

Reese said DrayPal also allows him to access CPG’s blog to keep with industry news, which he likes to do during downtimes like when he’s waiting at the rail yard. He also appreciates the driver experience feature, which gives him and other drivers an opportunity to provide feedback to CPG on work-related matters.

“One of the main features that I like on it is that you can set a weekly goal for yourself and dispatchers can see that and work with you to try to help you get to that goal,” Reese said.

While for its recent phase one roll-out DrayPal was tooled to focus on financial visibility, Frye said the app may soon include push notifications going out to drivers regarding “return locations for empties, chassis return locations and pickup points.” 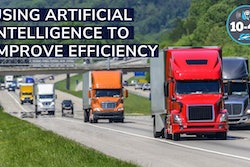 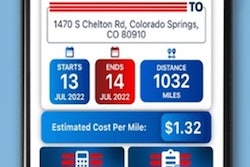 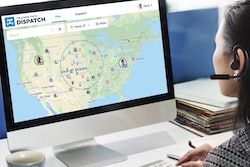