CCJ Chief Editor Jason Cannon was recently able to get behind the wheel of Volvo's zero emission VNR Electric for the second time since Volvo started taking orders for the unit in late 2020.

In this video, we get a detailed breakdown on how you can tell the truck is ready to move in the absence of the familiar sound of a running diesel engine.

Jason Cannon
Hey everybody, CCJ Chief Editor Jason Cannon here. Recently I was able to take Volvo's fully electric tractor for a spin. Now, this was the second time I've been able to drive the electric VNR, the VNR Electric, as Volvo calls it, the first time being in 2020. And that truck more than two years ago was a straight truck configuration and it was headed to DHE for use at its California port operations. Now, this recent truck was a tractor belonging to Online Transport, a 550 truck outfit, at least one of which is electric. This particular electric model gets about 150 miles of all electric range. A second generation model gets about 275 miles thanks to battery improvements and a dedicated battery thermal management system that manages and maintains ideal temperatures.

One of the things that I find most interesting about electric trucks is how technologically advanced and sophisticated they are yet they look just kind of like a normal truck. Yeah, there's some nuances that are recognizable, but it's not obviously different inside or out. For example, under the hood of the VNR Electric, there's obviously not an engine, but there's a package of technology and corresponding wires and hoses that look enough like an engine to fool the casual observer. Once you're inside, I think that's really where the difference hits home. It mostly looks the same, but it certainly doesn't sound the same. Honestly, it's kind of intimidating to climb up into a truck and not know whether or not it's on. Without the clatter of a diesel engine, the signs that the truck is ready to go, they're pretty subtle. Now, I spent some time with Brett Pope, who's Volvo's Director of Electric Vehicles, and I asked him to walk us through just how to get the truck ready to move.

Brett Pope
So for the VNR Electric, it's exactly like the diesel product. You do have a key, stick it into the ignition. We'll turn it to the run position. The truck will start going through the checkout. You see the sweep of the gauge on the instrument cluster. You'll hear the solenoids clicking on the ABS sensors. It goes to its normal routine. It's telling us our axle lifted, see a battery state as charge, but how do we know if the truck's ready to go? You'll turn the key one more time to a start position, goes to the rest of the check out, and then what you'll notice here is on our power meter, it's now standing at the zero position and then we have this green truck symbol. So when it's time to move it into drive, put your foot on the brake pedal, release your parking brake, select drive in the i-shift pad, and you'll get confirmation on the cluster, and you're ready to go.

Jason Cannon
I didn't get a ton of time in the tractor, a couple of handfuls of laps that was probably only supposed to be one handful. This was, after all, a working tractor and it had places to go with stuff to deliver, but I did have enough time to know that I needed some more time, specifically when it comes to finessing the regeneration break or the electric equivalent of an engine break. Now I use the engine brake pretty liberally, and it takes a different skill set to properly use the regen brake. It basically has four modes. It's off, low, medium, and high. You can toggle between all the stages to slow the truck yet maintain maximum momentum. It never really applied the service brake. Ideally, you'd only apply the brakes when you wanted to stop, and I think the kids call that hypermiling.

My goal, since time was short, was to make a lap around the track as safely as possible without actually ever applying the service brakes. I was able to do that on the last lap since the regen brake pumps energy back into the battery, you want to use it as much as practical, but if you overuse it, you waste battery energy by having to get back into the throttle to speed the truck back up. The window there to harvest energy while maintaining momentum is pretty narrow. And also the stalk for the regen brake was right by the stalk for the windshield wipers, and they looked basically the same so it took me more laps than I really want to admit to to stop turning on the windshield wipers and activate the regen brake.

In all, I think Volvo's Electric VNR is exactly what it needs to be, and that's a mostly familiar driving experience. No driver wants to climb in and learn how to drive all over again. The experience here is fundamentally the same. There are some minor retraining that's going to have to take place and sort of learn how to work with the truck and some of the new technologies just to get maximum efficiency. But I think the drivers see the march toward electrification as a problem for the suits, so to speak, not necessarily one for the drivers. All they want to do is drive and the VNR Electric allows drivers to do just that. 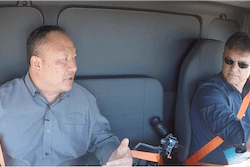 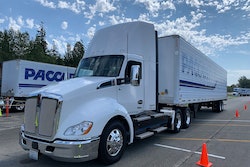 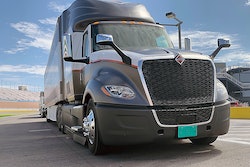