The electric truck is carving out a niche in stop-and-start and low-mileage applications, so sending a small fleet of them into California’s ports sounds like no-brainer.

The first crop of LIGHTS trucks have been ordered and delivered, but delivery of one straight truck in particular may have been a little behind schedule because, last week, I was driving it around the Auto Club Speedway in Fontana, California.

My test unit, one of the first five units to be built, belonged to DHE and is part of Volvo’s LIGHTS partnership, which will see a combination of straight-trucks and tractors service dedicated routes in and around California’s Inland Empire. The number of eVNRs is expected to swell to more than 20 by the project’s end, bring along with them an array of electric support equipment, like forklifts and pickups, public and private charging infrastructure and dealership-based electric truck service and maintenance capabilities.

The first five trucks were built on the line at Volvo’s New River Valley (NRV) truck assembly plant as a glider before being finished by hand in Greensboro, N.C. When the trucks enter production late this year, the electric VNR will be built in NRV on the same line as conventional VNR models but its electric driveline will be installed on a different production line.

The electric VNR’s driveline is time-tested, having started on Volvo’s electric bus (Volvo has sold more than 4,000 electrified buses since 2010). It was then integrated into Volvo’s European FE electric cabover before making its way to the VNR.

The truck’s radiator is functional and keeps the system heated and cooled, which supports battery life. A modular power box – basically the brain of the whole outfit – sits where a diesel engine would normally. Packs of batteries flank the cab, each weighing about 1,150 pounds, and supply onboard power. The battery system is designed like a shelf, allowing packs to be slid in and out for service.

The charging port is located on the driver’s side, which prevents the driver from unknowingly pulling away while the truck is charging. You’d practically have to climb over the cable to get into the cab.

The eVNR features center-mounted dual electric motors with a two-speed gearbox. The truck seamlessly shifts into second gear around 30 mph. It doesn’t take off like a rocket – nor should it – but the torque and power are instant.

The electric truck may one day revolutionize the transportation industry, but very little of what matters to the driver is slated to get an overhaul. As far as the driving experience, there’s no sexy story to tell. It feels, handles and drives like a truck, which is a good thing. Of all the obstacles to overcome – lack of infrastructure, range anxiety and battery weight and cost – reinventing on-road feel and performance is an unnecessary war to fight.

Gear selector buttons – neutral, drive and reverse – are mounted in the dash. To move the truck forward, you release the air brake, hit the D button and punch the throttle. There’s no creeping along at idle, so hitting the pedal is pretty important.

By placing the truck in reverse, the truck’s electric motors turn in the other direction. There is no “shifting” into reverse. That makes the change in course much smoother and easier on the cargo.

A gauge where the tachometer would normally be tells you the amount of load on the battery. At rest, it points to zero. Depending on speed, grade and load, it will drift to some degree of negative.

Coasting downhill, for example, with the regenerative brake engaged will pump more power into the battery and push the needle toward the plus side, as you’re making more energy than you’re using.

The regen brake is located on the stalk where the engine brake would be, and similarly has three stages. Each will engage after about 2 seconds of the driver having taken their foot off the accelerator. An automatic setting takes into consideration the truck’s payload and targeted range to capture the most amount of energy needed in the smoothest stage possible.

Volvo will use the LIGHTS project to help determine just how far its electrified VNRs can travel on a full charge under load, but the range demand on these routes is pretty minimal – generally less than 175 miles.

Volvo has logged about 2,000 test miles across the first five trucks but they’re about to be handed over full time. These trucks aren’t technology demonstrators. They’re working trucks. They have real freight moving obligations and downtime will be a problem.

And that’s exactly how VTNA President Peter Voorhoeve wants it. LIGHTS isn’t a science experiment and Voorhoeve hopes it will pave the way for a greener, emissions-free electrified future where electric trucks at a port will be as ubiquitous as Maersk containers.

“I would like to able to say that this LIGHTS project really changed the use of electromobility,” Voorhoeve said, noting he has a higher objective to the project than simply getting orders. “I hope to sell as many of them as possible, but this is larger than selling trucks. This is about moving the public opinion that this works. That this is the way forward. If we get that, then LIGHTS was a success.” 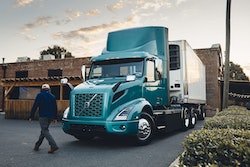 Volvo kicking off sales of its VNR Electric model 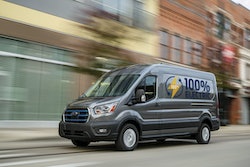