Jason Cannon, CCJ chief editor
Mar 10, 2021
The 2022i Isuzu N-Series diesel trucks will begin production in July, and will be available at its network of nearly 300 dealers in the U.S. in the third quarter this year.

The 2022i Isuzu N-Series diesel trucks will begin production in July, and will be available at its network of nearly 300 dealers in the U.S. in the third quarter this year.

EVSC will be standard on all 2022i N-Series diesel models. The platform monitors the truck’s steering wheel angle, individual wheel rotation speed and lateral G forces. When the system senses the vehicle is at risk of stability loss, it alerts the driver via an on-dash warning light, automatically reduces engine output and applies braking pressure as needed to help the truck maintain stability. EVSC works in tandem with Anti-Slip Regulation (ASR)/traction control, an advanced traction-control system that works to provide grip when the truck is on loose or wet surfaces. ASR will also be standard on all 2022i N-Series diesel trucks. Both EVSC and ASR can be manually deactivated by the driver through switches located on the instrument panel.

An all-new ADAS, equipped with AEB and a passive Lane Departure Warning System will be optional on all models in the 2022i N-Series diesel truck range. Each utilizes a new dual-camera sensing system mounted atop the vehicle’s dashboard. AEB includes both vehicle and pedestrian detection. The system will warn the driver with both visual and audible alerts and, if necessary, will automatically apply braking force to reduce vehicle speed. AEB can be deactivated through an instrument panel-mounted switch.

The optional Lane Departure Warning System (LDWS) uses the dual-camera sensing system to “read” the lines on the road ahead. If a driver strays too far from the road’s center, both visual and audio alerts will warn the driver. LDWS allows the driver to adjust the system’s sensitivity through a switch on the instrument panel.

"This dual [camera] system really allows for accurate object detection and perspective of the object within the N-Series cab," said Tim Ellsworth, manager of product planning.

For customers who do not order the optional Advanced Driver Assistance System, Isuzu will continue to offer the Mobileye suite of collision and lane-departure warning systems as optional equipment.

Isuzu will add rear disc brakes to the already-standard front disc brakes on the MY 2022i NPR-HD, NPR-XD, NQR and NRR diesel models. The setup, Ellsworth said, is similar to braking setup deployed on the Class 5 gas truck this year.

The discs are part of a new Vacuum + Power Assist Brake System with anti-locking braking (ABS). At the limit point of normal vacuum assist, a hydraulic unit will provide additional line pressure. Vacuum assist is a new standard feature for both the NQR and NRR.

On the exterior, bi-LED headlamps (the low- and high-beam are in one lamp) with signature light will deliver more light and less heat than halogen bulbs. The lamps, along with turn signals featuring a new shape and accent brow, surround a standard matte silver grille and give the truck what Skinner called "an aggressive look."

The matte silver grille replaces the previous white grille, and a chrome grille will remain an option.

The inside of the Hexapod cab features darker gray color schemes on the lower section and darker accents – including the steering wheel, gear shift lever, parking brake lever and other controls. Lighter gray components up above create a greater sense of spaciousness. The color mix, Ellsworth said, is a changeover from the "medium gray" that was used across the entire cab.

Seating surfaces will now be covered in a gray and blue cross-pattern tricot fabric that adds a modern look and feel while reducing the appearance of stains and scuffs.

Outside, the standard 30-gallon fuel tank will now be constructed of stainless steel rather than conventional steel to improve corrosion resistance. The tank will also be flush mounted to the top of the frame and will feature top-mounted, three-eighths-inch fuel return and fuel supply ports to help eliminate cutting and drilling the tank during auxiliary fuel port applications.

A larger fuel sedimenter/filter on 2022i N-Series diesel trucks will allow for improved service intervals. The water separator body will feature a translucent red body, making it easy to identify and to determine when water needs to be drained. A heater will be standard with the fuel sedimenter/filter. 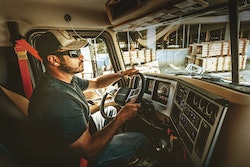 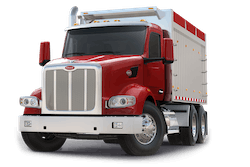