Navistar will not be ordered to pay $30.8 million in damages to Tennessee-based Milan Express (CCJ Top 250, No. 159) after a ruling by the state’s high court upheld an appellate court’s decision to throw out a lower court’s ruling.

In August 2017, Navistar was ordered to pay nearly $31 million to Milan, which had purchased 243 International ProStar tractors equipped with MaxxForce engines in 2011 and 2012 and alleged that Navistar knew its MaxxForce engines had defects but brought them to market regardless. The jury awarded the carrier $10.8 million in actual damages and $20 million in punitive damages for the problems the carrier experienced with the engines.

However, in August 2019, an appellate court tossed that decision based on its interpretation of Tennessee’s economic loss doctrine.

The Tennessee Supreme Court on Aug. 2 sided with the appellate court’s decision, but on separate grounds.

The Tennessee Supreme Court also ruled that the Tennessee Consumer Protection Act (TCPA) does not apply to commercial transactions, noting that the trucks sold to Milan were not “goods” as defined by the TCPA.

“Therefore, the Court set aside the trial court’s award of attorney’s fees and costs to Milan against Navistar based on the TCPA,” the opinion added.

“We’re proud that the Kenworth T680 Next Generation – our most aerodynamic truck ever – has earned the EPA SmartWay Designation,” said Joe Adams, Kenworth chief engineer.

During the design process, Kenworth conducted aerodynamic simulations to develop each individual component of the T680 Next Gen as part of the total system and verified results through wind tunnel testing. Kenworth focused on keeping airflow closer to the cab and reducing turbulence. The bumper’s improved profile directs air underneath the chassis and past the wheel openings. The hood is eight inches narrower than before, allowing the T680 Next Gen to cut through the air.

Combined with spec’ing optional enhancements – such as tandem drive axle fairings and 28-inch side extenders behind the cab – these design features offer up to 6% fuel efficiency on a T680 Next Gen with a 76-inch sleeper and EPA 2021 PACCAR MX-13 engine over a comparably spec’d T680 with EPA 2017 PACCAR MX-13 engine, according to Adams.

A tractor and 53-foot trailer were stolen from a truck stop in Meadowview, Virginia, on Aug. 3, while left unattended during a DOT break, according to a risk alert from cargo theft recording firm Sensitech.

The tractor was located later that night in Kingsport, Tennessee, but there were no signs of the trailer until the Sensitech GPS device embedded in the trailer provided an updated location in Knoxville, Tennessee.

Through coordinated efforts with the Knox County Sheriff’s Office and the Sensitech Emergency Response Team, the stolen trailer was found at a local truck stop, leading to the successful recovery of the cargo, which had a high product and resale value, Sensitech said.

The firm believes the theft was carried out by an organized criminal group. Sensitech said the criminals target loads while unattended, then unhook the trailer and abandon the tractor. A second stolen tractor is used to transport the stolen trailer once unhooked.

The criminals then paint over any logos and identifying numbers on the trailer, which is then staged at an inconspicuous location awaiting potential recovery responses facilitated by tracking devices.

Sensitech said this particular criminal group operates within an area of at least a 144-mile radius of the theft location.

Peterbilt takes its electric 579 to D.C.

The visit began with U.S. Energy Secretary Jennifer Granholm announcing $60 million in funding for 24 research and development projects that include projects directly related to reducing emissions through battery and electrification technologies being used within the transportation industry. U.S. Commerce Secretary Gina Raimondo then took the Model 579EV for a ride around the Capitol as part of a video with Energy Secretary Granholm and White House National Climate Advisor Gina McCarthy.

The next day, the battery-electric Model 579EV was on display at Peace Monument directly in front of the steps leading up to the Capitol building.

Several members of Congress stopped by during the course of the day including Texas Senator Ted Cruz as well as Delaware Senator Tom Carper, Chairman of the Senate Environment and Public Works Committee.

“Seeing a Peterbilt Model 579EV drive around our Nation’s Capital is a testament to our commitment towards zero-emission progress, and we were honored to share our message with leading government agency officials and members of Congress,” said Jason Skoog Peterbilt general manager and PACCAR vice president.

Peterbilt also offers a full array of battery charging products and infrastructure services to its battery-electric customers. Through Paccar Parts customers can obtain a complete assessment of their electric grid and charging infrastructure needs. This assessment is completed in advance of the battery charger purchase process to ensure smooth in-servicing of these advanced technology vehicles 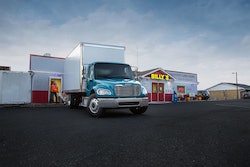 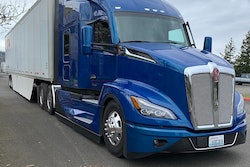 Kenworth adds Cummins Westport ISX12N as an option for T680