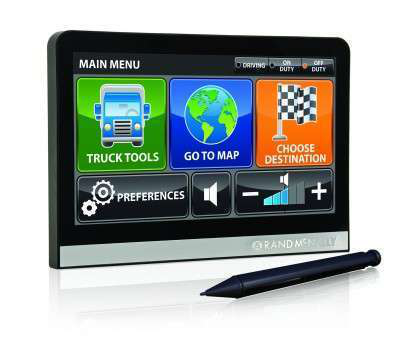 “Rand McNally is committed to providing innovative technology and location-based information to drivers and fleets,” said Dave Muscatel, chief executive officer of Rand McNally. “The IntelliRoute TND 700, with its larger high-definition screen size, will enhance the in-cab navigation experience providing for greater ‘glanceability,’ as well as a quick, thorough understanding of the road ahead.”

The IntelliRoute TND 700 includes two new Trucker Business Tools:
• Notepad – Drivers can type out a quick note such as “Call Dock with ETA 15 miles out” or “Good parking availability”;
• Calendar – Drivers can reference the day, week and month with a built-in calendar.

These features are accessed easily and used with an oversized stylus provided with the unit to extend reach in the cab. Enhancements to current features include access to POIs such as truckstops, rest areas and retail locations, with just a few clicks. Advance notification now is available for Norpass and Prepass availability at weigh stations. Border crossings can be preset to prohibit routing across country borders. Multistop routing has been improved to include on-the-fly and additional stopovers.

The IntelliRoute TND 700 has a suggested retail price of $499 and will be available at truckstops nationwide. For more information, go to www.randmcnally.com/truckgps.