John Boyd, a professional truck driver for ABF Freight System Inc., has been named a Truckload Carriers Association Highway Angel for helping a severely injured man trapped in a dangerous location. On April 7, Boyd was traveling on Interstate 675 southbound near Beavercreek, Ohio, on his way from Dayton to Winston-Salem, N.C. It was about 5:15 a.m. and still dark when he took an offramp to proceed onto U.S. 35 eastbound.

In the curve of the ramp, he came across lots of debris and a vehicle that was partially on the ramp. Thinking someone’s car had spun out, he was considering going around the vehicle when he spotted a man lying on his back, partially on the ramp next to the guardrail. Boyd stopped and approached the unconscious man, who was bleeding profusely and appeared to have severe injuries.

Boyd called 911 and then returned to his truck, which was equipped with a set of double trailers. He backed up about 10 feet and used the trailers to block the ramp from any vehicles that might drive into the scene and possibly hit the victim. He checked the vehicle for additional passengers, and seeing none, he then attempted to make the man as comfortable as possible. He stayed with him until authorities arrived, then provided information and stayed at the scene for another few hours.

“It was the strangest thing,” Boyd says. “I hadn’t driven the Dayton to Winston-Salem route for six or seven years. I don’t know why, but something told me to drive that way this time.”

Authorities eventually pieced together what happened. The 27-year-old soldier, who was home on leave from Iraq and was about to head out to Afghanistan, had been traveling eastbound on the U.S. 35 ramp to I-675 northbound when he lost control of his car and drove off the left side of the road. The car flipped over the guardrail, rolled at least four times and landed on the ramp, ejecting its driver onto the pavement where Boyd found him. From the position where his body landed, if Boyd had not blocked traffic with his trailers, the man almost certainly would have been hit by other vehicles as they attempted to go around the wreck. Because Boyd took the time to stop and help, the man survived.

The mayor of Beavercreek was so impressed by Boyd’s actions that he honored the driver with a special certificate of recognition. But Boyd is modest when discussing the incident. “When things happen, you do things instinctively,” he says. “Like I later told the boy’s grandfather and mother on the phone, it was a great honor for me to be in a position where I could help.” 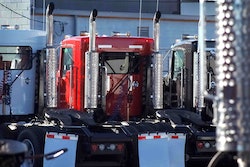 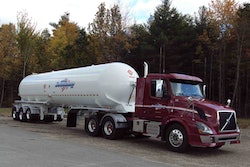