John Cleese to keynote at The Work Truck Show

British comedian John Cleese is bringing his unique perspective on business and life to The Work Truck Show 2011 as the event’s keynote speaker. He will speak at the President’s Breakfast and National Truck Equipment Association Annual Meeting on Wednesday, March 9. The Work Truck Show 2011 is held in conjunction with the 47th annual NTEA Convention at the Indianapolis Convention Center, March 8-10, 2011.

Cleese is both a comedic actor and a business motivator. With the legendary “Monty Python’s Flying Circus,” “Fawlty Towers” and “A Fish Called Wanda,” he created a unique comedic style that has inspired countless writers and comedians. His influence is also felt in the corporate world. Cleese and three fellow British actors founded Video Arts, the world’s largest provider of business training programs, in 1972.

Cleese attributes his success at making hit training programs to his fascination with psychology and his love for teaching and making people laugh. “Humor in training increases retention and decreases anxiety,” Cleese says. “When the training point is surrounded with humor, it can be readily digested, remembered and applied.” On the lecture stage, Cleese brings his award-winning series of videos to life.

“President’s Breakfast attendees are sure to start the day with a laugh, as well as a new way of approaching business challenges,” says Jim Carney, NTEA executive director. “We’re looking forward to hearing John Cleese’s insights into work, business and life in general.”

The President’s Breakfast and NTEA Annual Meeting at which Cleese will speak is open to show and convention attendees by ticket only. Tickets are $59 for NTEA members and $79 for nonmembers (if purchased on or before Jan. 28, 2011). 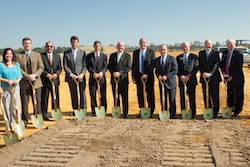