Bill Graves, president and chief executive officer of the American Trucking Associations, on Wednesday, Jan. 19, sent a letter to President Obama concerning his new Executive Order and its applicability to this administration’s recently proposed hours-of-service rule changes. “Timing is everything Mr. President, and the timing of your ‘Improving Regulation and Regulatory Review’ Executive Order could not have been better,” stated Graves in his letter.

In his Jan. 18 article about the regulatory initiative in the Wall Street Journal, President Obama stated, “…we have, from time to time, embraced common sense rules of the road that strengthen our country without unduly interfering with the pursuit of progress and the growth of our economy.”

“The trucking industry, overwhelmingly comprised of small businesses, agrees,” Graves says. “We have indeed embraced such rules. Perhaps no better example of one such ‘rule of the road’ applies to the 4 million professional truckers using America’s roads – it’s the Hours of Service (HOS) rule governing driving and work time limits. The current HOS rule – in place for more than 7 years now – has strengthened the $550 billion trucking industry and the huge slice of the U.S. economy that relies on trucks, while at the same time facilitating the most dramatic truck safety improvements our industry has ever seen.”

Graves’ letter goes on to say that, “The U.S. Department of Transportation (DOT) changed the HOS rule for truck drivers in 2004. That change was welcomed by trucking because, using your words, Mr. President, it struck ‘the right balance.’ ” According to DOT figures, from 2004 to 2008 (the latest year data is available) truck mileage increased by almost 10 billion miles. During this time, the industry achieved historic lows in the three most significant highway safety-related measures: fatal, injury and property damage crashes.

“Mr. President,” Graves says, “FMCSA’s Dec. 29, 2010, proposed changes to the HOS rule are, using your words, ‘just plain dumb,’ and ‘not worth the cost’ of making ‘our economy less competitive.’ The Agency’s own analysis shows the rule’s costs outweigh the safety benefits. Further, the alleged health benefits are purely speculative and not based on hard data or science. Trucking is meeting its service and safety responsibilities Mr. President. We ask that your DOT meet its responsibility to address safety and health issues with science and legitimate benefit-cost analyses. FMCSA’s Dec. 29, 2010 proposal fails on both accounts.” 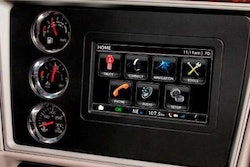