“Current rules have led to record low levels of crashes and fatalities involving trucks,” Boehner and Cantor wrote. The White House and Congress should work together to lift a potential “$1 billion in regulatory burden.”

Their letter comes two weeks after a similar Sept. 23 letter to Obama from House Transportation Committee Chairman John Mica. The Florida Republican wrote that the proposed rule would be an unnecessary and costly regulatory burden on truckers, given the improved record of truck safety since the 2008 rule became effective.

On Aug. 30, Obama responded to Boehner’s request for pending regulations with compliance costs of more than $1 billion. Seven proposed rules qualified, including the HOS proposal at more than $1 billion and electronic onboard recorders at $2 billion. Soon after issuing that list, Obama withdrew the U.S. Environmental Protection Agency ozone proposal, which would have been by far the costliest at $19 billion to $90 billion. On Jan. 26, the House transportation committee released its oversight and investigation plan, which included monitoring HOS developments.

The Owner-Operator Independent Driver Association and the American Trucking Associations have said the HOS proposal is costly and unnecessary since data indicate safety improvements under the current rule. On Sept. 2, Dave Osiecki, an ATA senior vice president, wrote Cass Sunstein, administrator of Office of Information and Regulatory Affairs, which is under the Office of Management and Budget. Osiecki said he was optimistic the proposed rule would not be made final. “If, however, it does not, its proposal will necessitate a very high level of scrutiny on the part of your office,” he wrote.

Under the current proposal, FMCSA is, among other changes, considering whether to reduce the daily driving limit from 11 hours to 10 hours and has proposed to limit the 34-hour restart provision by requiring that it include two periods from midnight to 6 a.m. and limiting its use to once per week. FMCSA appears likely to publish an HOS final rule by its court-ordered Oct. 28 deadline. The agency sent the proposal to Transportation Secretary Ray LaHood Aug. 11, and after LaHood finishes consideration of the proposal, the Office of Management and Budget will review it before publication.

The U.S. Court of Appeals for the District of Columbia originally set the Federal Register publication deadline for July 26, which it later extended. In 2009, FMCSA had entered into a settlement agreement with safety advocacy groups and the Teamsters union to revisit the current rule and publish a final rule. This agreement stipulates if the agency produces a “substantially different” rule from the current one, this “may” eliminate the need for further judicial review. 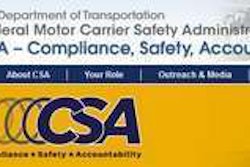