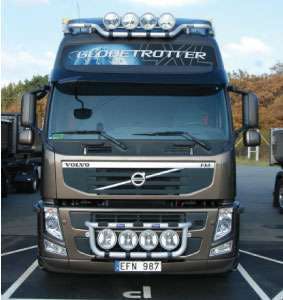 Swedish law precludes anyone driving a commercial vehicle there without an extensive education and examination process – but there is a loophole for “vehicle demonstrations” for manufacturers such as Volvo, which recently invited CCJ Executive Editor Jack Roberts overseas for a visit.

It’s one of the perks of my job – getting to take a tractor-trailer down the highway through the Swedish countryside for a little taste of trucking outside U.S. borders. And you always can count on an interesting trip when you manage to land an assignment like that. Sweden is about as buttoned-down a country as you’re likely to find on this planet. Rules and regulations are the norm – on top of business and competitive issues that sound all too familiar to U.S. fleet executives.

As in the rest of Europe, cars have priority in Sweden, and it doesn’t matter how much money you paid in road and fuel taxes last year: Hours of service, vehicle lengths, weight, speed, driver pay and virtually every aspect of a truck operating there is monitored and supervised to ensure the safety of the motoring public.

Sweden is an orderly country. Its people are not fond of surprises. So their government isn’t kidding when it says it expects drivers of all types of motor vehicles – commercial or otherwise – to obey all highway laws at all times. Not surprisingly, there is zero tolerance for mistakes.

Such is life on Volvo’s home turf. But it’s instructive in that you get a real sense of how this Swedish company’s corporate culture originated. Safety is not just a catchphrase at Volvo. After a week touring Volvo factories, visiting with customers and driving their cabover trucks, I understand that safety and environmental concerns are embedded in the company’s DNA.

Just getting to drive a tractor-trailer on Swedish highways is a fairly big deal. Normally the law precludes anyone driving a commercial vehicle without an extensive education and examination process – but there is a loophole for “vehicle demonstrations” for manufacturers such as Volvo. I’ve got it easy: All I have to do is turn the key and go. Most Swedish truck drivers – and increasing numbers of drivers on the European continent – first have to blow into an alcohol Breathalyzer tube and get a clear result before the truck will start. And the driver has to reblow in the tube any time the vehicle is switched off for longer than 30 minutes. It’s a $1,500 option and increasingly popular as a means of accident defense.

Once the vehicle is running, the driver has to insert his version of a CDL into an electronic control module located in the bulkhead above the driver’s seat. All European commercial drivers’ licenses have a computer chip built into the back of them that records data from the vehicle and stores it for up to a year at a time. Everything from hours of service to GPS-based speed limit information goes onto the card. Get pulled over – it happens three or four times a year on average – and the cops swipe the card through an electronic reader to see if you’ve done anything wrong. As a result, you easily can find yourself fined for a traffic violation that occurred weeks ago – and the fines are steep, too.

And the enforcement isn’t just passive, either. At several points during my drive, I encountered road signs with a camera displayed on them; these are considered fair warning that you’re entering a speed zone. And if you’re going even one kilometer per hour over the posted limit, a camera aimed at the roadway will snap a picture of the vehicle and transmit it to the Swedish Highway Patrol.

Once they’ve got it, all registration records for the vehicle, as well as all associated drivers’ licenses (family and employees), are called up and examined. Once a visual match is confirmed, a ticket will be mailed to the offender. However, the police take pains to send a photograph of only the driver of the offending vehicle: The passenger is never included because there were too many instances of spouses opening tickets up and finding girlfriends or boyfriends along for the ride.

It simply wouldn’t make sense for Volvo to have one set of values for Sweden and one for North America. And that’s a philosophy that Volvo Trucks North America has unapologetically adhered to here at home and will continue to do so in the future.

No surprises. Getting permission to drive a truck in Sweden is a big deal.

Long arm of the law. Make a mistake on the road in Sweden, and you’ll get caught.

As competition intensifies in the medium-duty engine market, quality and reliability remain the most important aspects of overall satisfaction, according to the J.D. Power and Associates 2011 U.S. Medium-Duty Truck Engine and Transmission Customer Satisfaction Study, which measures customer perceptions of 2010 model-year Class 5-7 gasoline and diesel engines.

The study finds that in 2011, owners are most satisfied with engine reliability and dependability, compared with all other factors. However, while the incidence of engine-related problems for medium-duty trucks remains stable from 2010, averaging 39 problems per 100 vehicles (PP100) in 2011, there has been an overall increase in these problems over time. During the past five years, the average number of problems with medium-duty truck engines has increased by 13 PP100 among trucks that have been in service for 13 to 18 months.

“Whether manufacturers can reverse the steady increase in problem occurrence remains to be seen, particularly with the effects of the EPA’s 2010 mandates coming into play,” says Brent Gruber, senior manager of the commercial vehicle practice at J.D. Power and Associates.

Hino Trucks engines rank highest in customer satisfaction for a fourth consecutive year with a score of 794 on a 1,000-point scale; Cummins follows in the rankings with 763.

BatRF by Stemco’s AirBat low tire log is designed to enhance the tire pressure monitoring system’s driver accountability features by storing low tire history on each tire sensor. Each AirBat sensor records and time-stamps tire pressure information, retaining in memory the duration and lowest recorded pressure for each low tire event. Stemco says the information can be read by the system’s handheld reader.

A Mack Pinnacle undertook a two-week cross-country tour from California with the White House Christmas Tree.

Applications for the K270 and K370 include pickup and delivery, lease/rental, towing/recovery, landscaping, furniture and food processing and distribution that require a maneuverable truck with an 18- to 26-foot van body size, stake bed or roll-on/roll-off bed. The 63.4-inch BBC on the K270 and K370 provides a 55-degree wheel cut for added maneuverability.

The 33,000-pound GVWR K370 cabover features a 4-by-2 Class 7 truck configuration and is built on a North American-based chassis similar to that of the T370 conventional. The K370 will feature the 6.7-liter Paccar PX-6 engine with a standard 220 horsepower rating with 520 lb.-ft. of maximum torque. Optional ratings are 240 horsepower with 560 lb.-ft. of torque and 250 horsepower with 660 lb.-ft. of torque. The K370 will be available with Allison 2500 HS and RDS 5-speed transmissions. The 12-volt supplied chassis will consist of 10¼-inch 120,000-psi steel frame rails, a wheelbase range of 166 to 214 inches, a mechanical rear suspension, a 45-gallon fuel tank and a horizontal aftertreatment system with a 6.6-gallon diesel exhaust fluid tank.

The 26,000-pound GVWR K270 cabover is a 4-by-2 Class 6 truck built on a North American-based chassis similar to the T270 conventional chassis. The K270 also will feature the 6.7-liter Paccar PX-6 engine with a standard 220 horsepower rating with 520 lb.-ft. of maximum torque. Optional ratings are 240 horsepower with 560 lb.-ft. of torque and 250 horsepower with 660 lb.-ft. of torque. The K270 will be available with Allison 2100 HS and RDS 5-speed transmissions. The 12-volt supplied chassis will consist of 9 7/8-inch 120,000-psi steel frame rails, a wheelbase range of 166 to 214 inches, front air disc and rear drum brakes, a mechanical rear suspension, a 45-gallon fuel tank and a horizontal aftertreatment system with a 6.6-gallon DEF tank.

Both the K270 and K370 have wide cabs that accommodate up to three people with a driver air-suspended seat and a two-person bench seat. The dash includes a master display information module with data on fuel consumption, service inspections, outside air temperature, coolant temperature, oil level, DEF level and trip information.

Navistar has made aesthetic upgrades to the interior of its Class 8 International ProStar+ tractors.

Navistar announced upgrades to the interior of its Class 8 International ProStar+ tractors, including a new Diamond interior trim package design concept offering diamond-stitched trim on the seats and door panels and throughout the sleeper cab. The aesthetics put a modern twist on the classic “tuck-and-roll” look but also are designed for maximum durability and easy cleaning. This interior option will be available for order in mid-2012.

As many fleets in the trucking industry are shifting toward Class 8 regional haul applications, Navistar also has upgraded the International TranStar with a premium Eagle interior trim package – the same package currently offered on the ProStar+ – featuring premium air-ride seats, a wood-grained dashboard, chrome accents and bezels, an ergonomic “wing panel” over the center console and a new Rand McNally in-dash GPS system with truck-specific map software.

Also, a new commercial-duty Allison TC-10 transmission will be available for ordering in mid-2012. The transmission is designed to offer seamless shifting through a 10-gear range using a torque converter and twin countershaft design. The TC-10 helps optimize acceleration and eliminate the interruption of power that occurs in manual and automated-manual shifting while increasing safety by offering greater low-speed maneuverability and better traction.

Also available to order on the TranStar are LED exterior lighting and the Bendix Wingman Advanced collision mitigation system. 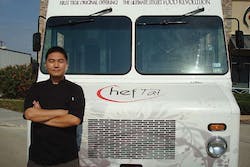 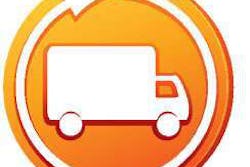 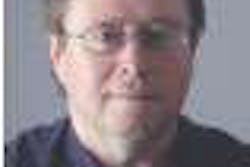 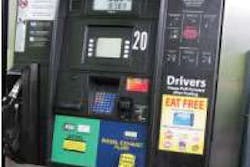