Havis announced today the launch of IdleRight2, the next generation of the company’s idle reduction and fuel management system.

IdleRight2 minimizes idle time by monitoring the battery’s voltage while the vehicle is turned off and electronics, such as light bars, radios and computers, are still on. When the battery voltage drops to a pre-set level, the system triggers the remote starter to run the engine long enough for the battery to recharge, then turns the vehicle off again. This process significantly cuts down on the vehicle’s idle time while mission critical electronics are in use, the company says.

In 2009, the Glastonbury Police Department in Glastonbury, Conn., tested the original IdleRight system to calculate how much idle time and fuel they saved with this system. During the test, a vehicle ran for four hours with all of its emergency lights activated. Before IdleRight was installed, the vehicle idled for the entire four-hour period and wasted 2.80 gallons of fuel. With IdleRight installed, that same vehicle’s idle time dropped to just 40 minutes, using only 0.46 gallons of fuel.

Based on this example, Havis says that if the department pays an average of $3.50 per gallon of gas and utilizes 100 vehicles that idle 25 percent of the time, the department could save over $445,000 per year in fuel alone with the IdleRight system.

The latest IdleRight system is designed to work with many after-market remote starters. It features an LED diagnostics system that shows what state the unit is in and allows customers to quantify their savings by outputting the number of idle hours saved, the company says. 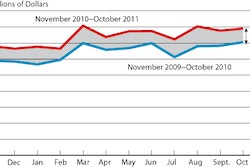