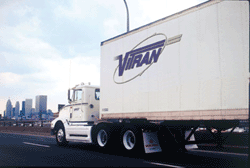 “We are disappointed with our consolidated second-quarter results,” said Rick Gaetz, Vitran president and chief executive officer. “However, we remain pleased with the operating results generated by our Canadian LTL and Supply Chain operation. Both management groups are focused on expanding their businesses for the balance of 2012.”

Gaetz said Vitran’s U.S. less-than-truckload operation continues to be its main challenge, priority and opportunity. “Although U.S. LTL operating results in the second quarter improved approximately 10 percent from the 2012 first quarter, the improvement was much less than we anticipated,” he said. “The delay in real recovery can be attributed to operating personnel turnover during the quarter as we continue to aggressively upgrade talent. This will help accelerate our recovery in the back half of 2012 and more importantly into 2013.”