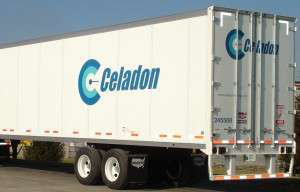 “We are pleased with the results,” the Indianapolis-based company said. Fourth-quarter operating ratio, which represents operating expenses as a percent of revenue excluding fuel surcharge, was 87.2 percent compared to 90.9 percent. Operating ratio was reduced to 90.2 percent for the 2012 fiscal year compared with 93.4 percent for the 2011 fiscal year.

Celadon credited an increase of 4.1 percent in rates, a decrease in overall equipment costs and a decrease in operations and maintenance expense, which it attributed primarily to its decrease in average tractor age. Offsetting these improvements was a decline in miles per seated truck of about 4 percent from the prior year, most of which was the impact of improved freight selection, according to the company.

The company said that through a series of acquisitions made during the year, it has been able to increase its average seated count by about 7.2 percent, which provides the capacity to allow it to significantly increase miles as fleets continue to exit the market and for when the economic freight market improves.