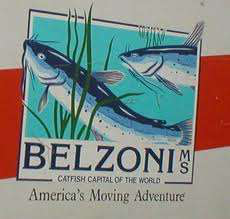 Spend enough time on America’s highways and sooner or later you’ll see a U-Haul trailer with a couple of healthy-looking catfish plastered on the side announcing, “Belzoni, Mississippi – The Catfish Capitol of the World!” U-Haul does a great job with this mobile-marketing campaign. The various cities and attractions they highlight instantly catch the eye, fixate the product and company in the public eye and provide a nice, albeit brief, distraction for drivers battling white line fever. And one of these days I’ve got to call up their PR Department and find out how – and why – they decided to call out the little town of Belzoni.

Last (blog) time around, I told about finding my grandfather’s old trucks out in the woods behind his old farmhouse and barn. The house, off Luster Road, is technically in hamlet called Gooden Lake. Only Gooden Lake hasn’t been much more than a name on a map since World War II. Belzoni – about 15 miles away – is the “big” town nearby: Unless you feel like setting out for Yazoo City or Greenwood.

This is hallow ground in music circles: Rolling Fork, where Muddy Waters was born and raised, is about 12 miles away. And a young B.B King wrecked a tractor in a ditch along Highway 7 near Itta Bina and cut out for Chicago instead of face the plantation-owner’s wrath. A bit further up the highway near Morgan City – a mere four miles from my Aunt Mibbie’s house — is the little Mt. Zion Baptist Church, which has a marker for Robert Johnson in its graveyard. Robert may be in that graveyard. Or not. Nobody’s really sure. He was killed in a little juke joint on the highway there – mostly likely fed poisoned whiskey by a jealous husband. Since everybody knew Robert had sold his soul to the devil down at the crossroads in return for playing demon guitar, the preacher wouldn’t allow him to be buried in the churchyard: So he got an unmarked grave and was probably lucky to get that. Two or three other churches nearby say they’ve actually got Robert in their ground. But Columbia Records thought enough of Mt. Zion’s claim to put the marker in the cemetery.

It’s not an easy place to find – although I’ve driven past it my entire life. One of my cousins had to show it to me. But the marker is adorned with whiskey bottles, guitar picks and coins from all around the world, left by Blues enthusiasts who come to the middle of nowhere to pay their respects.

This is heady stuff. But, sadly, Belzoni came up short when it comes to famous Blues musicians. They were all around the little town. All those old guys probably played there, stayed there and partied there. But Rolling Fork, Clarksdale and get all the glory. But, then again, you can be just about anywhere in the country today and catch a nod to Belzoni and its catfish ponds on those little orange-and-white trailers. And that’s something, I guess.