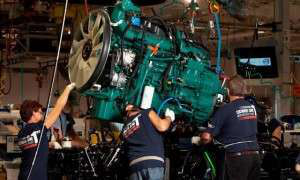 Economic activity in the manufacturing sector contracted in August for the third time since July 2009, but the overall economy grew for the 39th consecutive month, say the nation’s supply executives in the latest Manufacturing ISM Report On Business released Tuesday, Sept. 4.

The overall PMI registered 49.6 percent, a decrease of 0.2 percentage point from July’s reading of 49.8 percent, indicating contraction in the manufacturing sector for the third consecutive month; this is also the lowest PMI reading since July 2009 when it registered 49.2 percent.

“Comments from the panel generally reflect a slowdown in orders and demand, with continuing concern over the uncertain state of global economies,” said Bradley Holcomb, chair of the Institute for Supply Management Manufacturing Business Survey Committee.