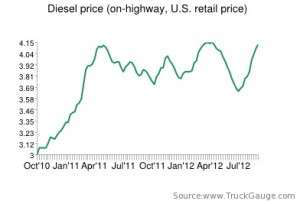 The national average retail diesel price climbed for the 11th consecutive week, climbing 0.3 cent to $4.135 a gallon during the week ended Monday, Sept. 17, according to the U.S. Department of Energy’s Energy Information Administration.

During 12 straight weekly declines from April 16 through July 2, the price of diesel had dropped 49.9 cents a gallon; since that time, the price has climbed 48.7 cents, although it has climbed only 0.8 cent over the past two weeks. This week’s price is 30.2 cents above the same week last year.

Average retail prices in regions tracked by DOE saw a mix of increases and declines. The largest increase was 2.1 cents in the Central Atlantic to $4.196, while the largest decline was 3.7 cents to $4.321 on the West Coast, which doesn’t include the state of California, where prices remained the nation’s most expensive diesel by region — $4.466 – despite falling 1.1 cent. The least expensive diesel by region on average was $4.028 a gallon on the Gulf Coast, where prices rose 0.7 cent.