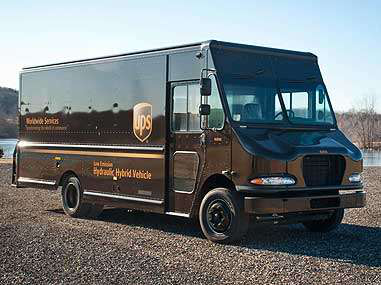 UPS on Wednesday, Oct. 3, announced the deployment of 40 new hydraulic hybrid vehicles – 20 in Baltimore and 20 in Atlanta. Developed by Freightliner Custom Chassis Corp. and Parker Hannifin Corp., the package cars are designed to achieve up to 35 percent improved fuel economy and up to 30 percent CO2 emissions reduction over traditional diesel-powered vehicles that use automatic transmissions in stop-and-go applications.

Both deployments were supported in part by grants from the U.S. Department of Energy’s Clean Cities program, which is focused on advancing the nation’s economic, environmental and energy security by supporting local actions to reduce petroleum consumption in transportation.

The HHVs in Baltimore will be deployed immediately, while the vehicles in Atlanta will be introduced before the end of 2012. UPS currently has one HHV in operation in Laguna Hills, Calif., and said it has been working closely with manufacturers to develop and test HHV technology since 2006.

“Our long-term goal is to minimize our dependence on foreign energy, and one way we will get there is through the deployment of a wide variety of technologies and designs in our fleet,” said Mike Britt, UPS director of alternative fuel vehicle engineering. “As early adopters of this technology, we are very pleased with the significant fuel economy and emissions reductions that come from the HHVs.”

The HHVs operate on two power sources – a fuel-efficient diesel combustion engine and advanced series hydraulic hybrid. Energy created by the vehicle’s continued braking action is stored in the HHV’s hydraulic high-pressure accumulator, similar to what is done with electric motors and batteries in a hybrid electric vehicle. The HHV has a function to turn off the engine and drive the vehicle using the stored energy to propel the vehicle, which can reduce up to 90 minutes of engine run time on a typical route. Because the HHV’s efficiency relies on constant braking, the vehicles are best suited for urban routes, which typically involve frequent stopping and starting.

“We are proud to be a part of this exciting implementation to UPS’s fleet,” said Shane Terblanche, general manager for Parker’s Hybrid Drive Systems Division. “We fully anticipate that Parker’s Hydraulic Hybrid technology for package delivery will provide outstanding bottom-line results and support UPS’s commitment towards a sustainable future.”