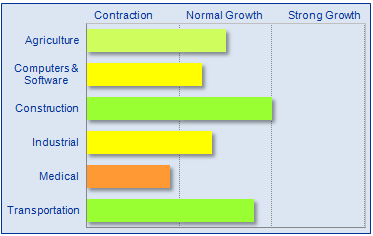 Projected growth in equipment and software investment for 2012 is 6.7 percent, down from the 2011 growth rate of 11.0 percent, the Equipment Leasing & Finance Foundation said Thursday, Oct. 4. ELFA’s quarterly update to its 2012 Equipment Leasing & Finance U.S. Economic Outlook shows growth in equipment and software investment slowed to an annualized rate of 4.8 percent in the second quarter of 2012, down from 5.4 percent in the first quarter.

The report focuses on the $628 billion equipment leasing and finance industry, forecasts equipment investment and capital spending in the United States and evaluates the effects of various related and external factors in play currently and into the foreseeable future. The report finds that the recent slowdown in durable goods shipments indicates that equipment investment continued to lose momentum in the third quarter but should remain positive – albeit at a decelerated pace compared to 2011 – through the rest of 2012.

“While growth in equipment and software investment is continuing, the pace of growth has decelerated,” said William Sutton, ELFA president and chief executive officer. “This finding aligns with ELFA’s Monthly Leasing and Finance Index, which indicates that equipment finance activity is still growing but at a slower rate than in 2011.”

Sutton said some sectors, including transportation and construction, continue to improve. “However, economic and political uncertainty, especially in the area of tax and budget policy, continues to hamper business investment, as reported both in the fourth-quarter Outlook report and the Foundation’s Monthly Confidence Index,” he said.

Among the quarterly update’s key findings:
• The U.S. economy continues to grow at an anemic pace, evidenced by weaker-than-expected job creation in the past three months. Although growth in equipment and software investment slowed to an annualized rate of 4.8 percent in the second quarter from 5.4 percent in the first quarter, it continues to be a driver of growth in an otherwise subdued economy; and
• Looking ahead to 2013, natural cyclical forces – particularly housing – should gain more traction and drive growth. However, some fiscal tightening is expected to counterbalance these positive trends. The revised projection for 2013 growth in equipment and software investment is 4.5 percent, down from the original forecast of 8 percent.