The national average price of on-highway diesel dropped 2.5 cents for the week ended Sep. 23 to $3.949, according to the Department of Energy’s Energy Information Administration. The drop — the largest drop in the average diesel price since the week ended April 29 — comes after three weeks of price stagnation, in which the price did not move from Sept. 2 to Sept. 9 — holding at $3.981 a gallon — and then fell just seven-tenths of a cent for the week ended Sept. 16.

That increase, however, capped a 9-week upswing.

The average price for a gallon of on-highway diesel also dropped in every region nationally except the Rocky Mountain region, which saw a two-tenths of a cent increase.

The biggest drop — a 3.7-cent decrease — came in the West Coast less California region. California still has the nation’s highest per-gallon average for on-highway diesel, $4.209, and the Gulf Coast region has the country’s cheapest diesel, with a $3.89-cent average. 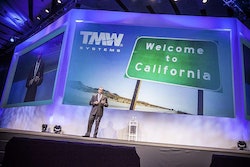