The number of cargo thefts in the U.S. from August to October fell 9 percent from the previous rolling quarter to 212, but the average value lost per load was $256,586, according to FreightWatch International, who releases a monthly report charting cargo theft activity in rolling quarters.

Food and drink loads (not including alcohol) were the most targeted loads, accounting for 46 (22 percent) of the thefts in the quarter. Products targeted, FreightWatch says, were meats, cereals, carbonated drinks and prepared foods.

Related: Preventing cargo theft: Educate drivers on best practices, what to do when followed

Seven categories had fewer thefts than in the prior quarter, including significant drops in building/industrial, alcohol/tobacco and metals, FreightWatch says.

Once again, California, Texas, Florida, Illinois and Georgia were the Top 5 states for cargo thefts, accounting for nearly 75 percent of the incidents.

Thefts due to unsecured parking accounted for 106 incidents, 75 percent. Secured parking made up 13 percent (19 thefts), of the total.

Overwhelmingly, incidents involving trailer theft or container theft were the most common — 157 thefts, or 74 percent. 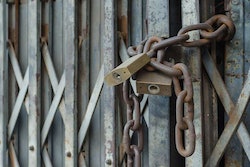