The national average price for a gallon of on-highway diesel jumped again in the week ended Feb. 10, rising 2.6 cents to $3.977. The price of diesel has now risen 10.4 cents in the last three weeks and has hit its highest point since the week ended Sept. 9’s $3.981.

This week’s spike follows two other large week-to-week bumps in the average diesel price, 3.1 cents the week ended Ja. 27 and 4.7 cents in the week ended Feb. 3.

The price of diesel is still 12.7 cents lower than the same week last year, when a large, multi-week diesel price incline was in effect.

Average prices also rose in all regions in the U.S., except for a one-tenth of a cent drop in the West Cost less California region.

The Central Atlantic, which has been surging in recent weeks, led all price increases with an 8.2-cent jump, followed by a 6.4-cent jump in the New England region.

The New England region also has the country’s expensive diesel, $4.369, followed by the Central Atlantic at $4.369. Year to year, those two regions are also the only two that are more expensive than the same week in 2013. Some regions, like the West Coast, California and Gulf Coast, are more than 20 cents cheaper than the same week last year.

The Gulf Coast region still has the country’s cheapest diesel, with a $3.788 per gallon average. 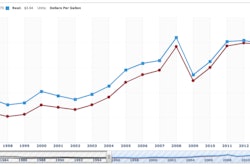