Navistar International Corporation announced late Thursday that it would consolidate its mid-range engine manufacturing as another step in its financial turnaround efforts. As a result, the company will move mid-range engine production at its Huntsville, Ala. plant to Melrose Park, Ill.

Navistar will continue to build its 13-liter engine at its Huntsville big bore engine plant.

“As we have stated previously, we have too much excess engine manufacturing capacity in North America and we must take action to reduce our costs and improve the business,” Jack Allen, Navistar chief operating officer, says. “The consolidation will further lower the company’s breakeven point, strengthen our competitiveness in the marketplace and help position Navistar for a return to profitability.”

When complete later this summer, the consolidation is expected to eliminate approximately 280 jobs at Huntsville and reduce Navistar’s operating costs by about $22 million annually.

“Ending production at a facility is a difficult decision because of its impact on the many great people who’ve been part of our company,” Allen says. “We understand that these decisions have an impact on our employees and the community and we will treat our people with dignity and respect throughout this process.” 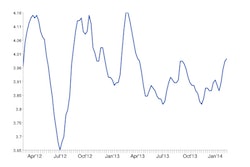