“Drive Safe Systems is first and foremost about supporting our drivers in the safe operation of our fleet and equipping them with tools to continuously learn and improve,” said Tom Clark, the company’s senior vice president of operations. “These technologies provide real-time feedback and coaching that helps our drivers recognize and correct unsafe behaviors, ultimately reducing accidents and near-misses. We want to be proactive in preventing crashes from even happening, and that means investing in proven technologies that complement and enhance the driver’s professional skills.”

The rollout of Drive Safe Systems represents the addition of two new in-cab safety technologies which join three existing “sense and alert” on-board systems that have been factory-installed in every new Con-way Freight tractor since late 2009. The two new systems are:

• Event recorders. This is a compact, windshield-mounted unit that records activity inside and outside the cab. The recording is continuously erased unless the unit is triggered by an event such as hard braking, turning or rapid deceleration. When activated, the unit saves a 12-second audio and visual recording— eight seconds before and four seconds after the event. The recording and other supporting data is uploaded via cellular networks to a “cloud-based” software application where it is subsequently shared with drivers to recognize exceptional defensive-driving performance which avoided an accident or incident, and provide coaching to identify opportunities to improve driving skills. Known as DriveCam powered by Lytx, the hardware and software system is provided by driver safety technology company Lytx, Inc.

• Collision avoidance featuring forward-looking radar with adaptive cruise control, which continually measures distance to a vehicle ahead and automatically slows the truck if it is approaching too rapidly and the driver does not engage the brakes in a timely manner. Known as the OnGuard System, this collision avoidance technology was developed by Meritor WABCO.

• Lane departure warning, which monitors a truck’s position relative to highway lane markings and issues an audible alert similar to traveling over a “rumble strip” if the operator unintentionally drives out of the lane. Known as the AutoVue system, this technology was developed by Iteris.

• Roll stability control, which senses conditions that are consistent with a vehicle about to roll over, such as during hard cornering or change of direction, visually alerts the driver, and automatically decreases engine torque to reduce rollover tendency. This system also was developed by Meritor WABCO.

Proactive coaching aims to prevent behaviors shown to cause accidents Professional athletes and coaches use video and real-time data all the time to identify performance techniques that can be improved, Clark noted. “We’re doing the same thing with our professional drivers and how they operate our trucks,” he explained. “It’s a fundamental shift in our approach. Before we reacted after-the-fact, analyzing accidents and why they occurred. Now we’ve flipped the process, focusing instead on using technology and real-time information as a positive, proactive coaching experience to adjust behaviors, remove risk, prevent incidents and improve safety.”

Veteran professional drivers embrace the benefits Mick Galbraith has been a professional truck driver with Con-way Freight for over 26 years, amassing nearly 3 million miles without a preventable accident. “I think I can speak for my fellow drivers when I say we’re competitive, we take pride in being professional, we want to be the best. New technologies can help an experienced driver realize opportunities to improve skills,” he explained. “These systems provide direct, real-time feedback; you can immediately see and understand unsafe behavior. It’s an opportunity to learn and correct something before it leads to an accident. That’s a real benefit that makes the driver a better operator and the roads safer for everyone.” 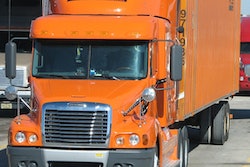 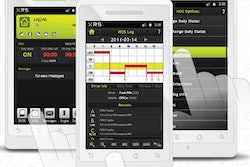 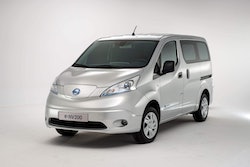