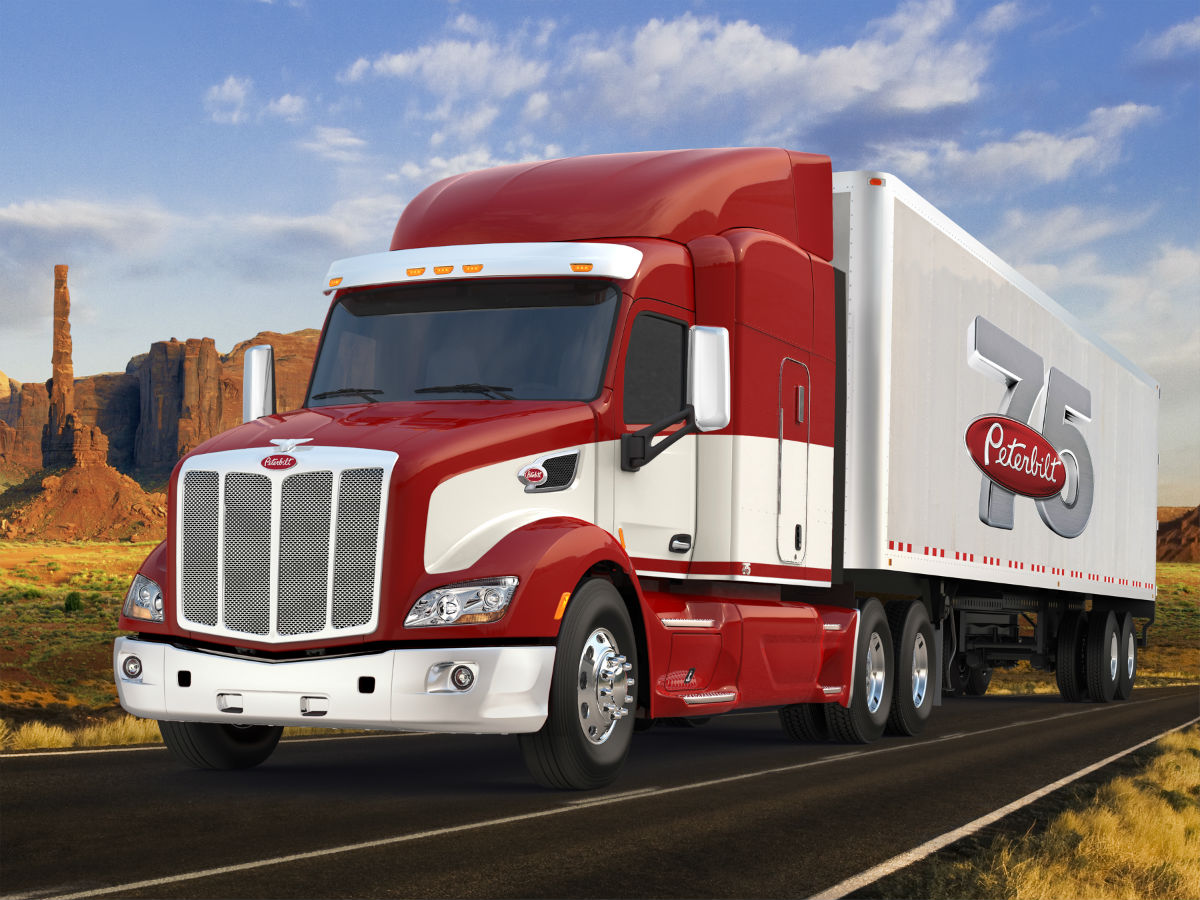 Peterbilt turned 75 years old back in January. And the truck manufacturer is celebrating its Diamond Anniversary with a special edition Model 579 tractor that will be the star of a nationwide tour starting in April.

But not content to rest on its laurels, Peterbilt continues to work on enhanced fuel economy features for its customers, including a new APEX optimized drivetrain package for the Model 579, that brings even greater levels of fuel economy
.
​According to chief engineer Landon Sproull, the new APEX option pairs the PACCAR MX-13 Engine with the Fuller Advantage Automated Transmission. The combination features optimized shift calibration, weight savings and proprietary control logic between the two components.

​Sproull says APEX can result in up to a 4 percent improvement in fuel efficiency versus previous drivetrains. Superior fuel economy is achieved, he said, through the precise fuel management resulting from proprietary communication technology.
​“APEX results in exceptional performance and fuel economy by pairing two already fuel efficient components together and optimizing the way they communicate to reach even greater levels of savings,” said Sproull. “This is a fully integrated powertrain that is packaged in our flagship Model 579, which is already exceeding customer expectations for fuel efficiency.”
​
The 12.9 liter PACCAR MX-13 Engine and the 13-speed Fuller Advantage share critical data including torque, operating gear and other vehicle performance metrics.
​Additionally, Sproull said, APEX is more than 80 pounds lighter than previous combinations and features a small-step ratio in 9th and 10th gears for a more fuel efficient operating range while downshifting.

Another new Peterbilt innovation is the company’s Driver Information Center, also introduced today. The new optional package is a real-time visual messaging system that reinforces and coaches positive driving habits. It is available for order on select Peterbilt models.

The module is available for Peterbilt Models 579, 567 and 587 equipped with PACCAR MX-13 Engines. It monitors numerous vehicle systems and driving habits to provide operator feedback through a scoring system that rewards practices to reduce fuel use and minimize brake wear.

The display shows operators performance scores in categories such as gentle braking and coasting, as well as total driver performance scoring percentage. If the system detects driving habits that are detrimental to fuel economy – such as erratic acceleration – or reduce component life – such as excessive hard braking – it will provide coaching tips with suggested corrective actions. For instance, the system may suggest the operator make greater use of engine retarder devices and less brake pedal use to maximize the life of the foundation brakes.

According to Sproull, the system performs both while the vehicle is in operation and while parked, the latter to help reduce idling time.

The Driver Information Center is a 5-inch, color LCD display screen located within the driver instrumentation cluster so operators can receive the information without taking their eyes off the road. In addition to the new functionality, it provides operators with essential data on vehicle and engine functions.

The most visually exciting news from Peterbilt today was the new 75th Anniversary commemorative Model 579 tractor, which features a striking red and white paint job and a whole host of exclusive features.

The two-color paint design is similar to that found on the original 1939 Peterbilt (as well as the 50th anniversary edition Peterbilt), and is enhanced with a  premium interior with exclusive logos and a unique numbered nameplate.

Sproull said exterior features of the special edition model include:

• A new optional 75th anniversary two-color paint design. A new proprietary color called Diamond Red was introduced for this model. Diamond Red – created in partnership with Axalta Coating Systems and part of their Imron Elite brand – is showcased on trucks exhibited at the Mid-America Trucking Show.

• A sequentially numbered 75th anniversary emblem is added to the dash accent trim.

• The multi-function steering wheel is lined with custom red stitching.

• Exclusive Peterbilt Evolution LX seats in black leather to complement the interior and boasts the 75th emblem stitched into the headrest.

Distracted driving has only gotten worse during the pandemic, and a new report reveals exactly which behaviors get drivers into trouble, and even collisions on the road. See what in-cab video reveals about distracted driving here.