SmartDrive Systems, headquartered in San Diego, supplies a windshield-mounted device that records inward and outward video of critical safety events. The device also connects to the vehicle’s communication channels to capture a detailed, play-by-play account of throttle, brake position, RPMs and other event data including that from active safety systems like lane departure warning, collision avoidance, and roll stability.

All of the event data is wirelessly transmitted to an operations center and reviewed by its staff of driver experts. After review, video-based event data is available to fleet management through a web-based portal. Taken altogether, SmartDrive is a managed service that delivers insights, recommendations and workflow tools to fleet managers to help them coach drivers on how to improve their skills in order to reduce collisions.

The risky driving behaviors identified by SmartDrive’s experts are scored and categorized so that fleets can track improvements over time to see how drivers, and the company as a whole, are improving in areas like speeding, distraction, fatigue and maintaining proper following distance.

The system also consolidates the event data into driver skills profiles and a “SmartDriver Score.” Management can use this score to prioritize site locations, business groups and other divisions in the company based on who is the most at risk and to recognize drivers and managers for performance.

One of the ways to increase driver acceptance of the technology is to emphasize the technology will be used in a constructive fashion as a training tool, not for disciplinary actions to catch drivers doing something wrong, says Jason Palmer, president of SmartDrive. Drivers also benefit from having the system exonerate them from wrongdoing by having a true representation of what happened at the scene of the event.

Bozutto’s, a wholesale distributor of food and household products to retailers in 13 New England and Mid-Atlantic states, is in the third year of using SmartDrive. To say drivers were reluctant towards having a camera in the cab would be an understatement.

“The initial rollout was a hostile environment. Drivers didn’t like it at all,” says Tom Halpin, transportation safety manager for Bozutto’s. The Cheshire, Conn.-based fleet employs 280 drivers. A town hall-style meeting was held during the rollout to assuage their concerns. Representatives from SmartDrive answered questions and explained the benefits of the system.

Halpin remembers a very different meeting six months later. Drivers were applauding the system for exonerating their peers from wrongdoing and the difference the system had made to the company’s safety record. Compliance, Safety, Accountability scores and accidents went down dramatically.

The score in the “unsafe driving” BASIC fell from 27.1 to 7.8; accidents dropped 22 percent. Seat belt and cell phone violations went down from 30 per year, on average, to zero. And for first time in recent history, Buzzuto’s insurance company did not raise its rates.

“We went from non-acceptance to 360 degree acceptance,” he says. “Now our drivers would be hesitant to take it out.”

Meritor WABCO and SmartDrive Systems recently announced that they will integrate their products and services. Meritor WABCO offers the OnGuard collision mitigation system and advanced braking and stability control technologies.

By leveraging this information, SmartDrive says that fleet operators will have insights into driving events to determine what happened, when and why vehicle safety systems engaged, and the potential root causes of safety-related incidents.

SmartDrive also announced a new ‘Dynamic Range’ Safety Events feature that will dynamically adjust the time frame of the video capture based on the specific type of event.

For example, ‘following too close’ is a high risk contributor to collisions, especially when combined with other factors like speeding and distracted driving. When a driver is following too close, the 25 seconds that led up to the warning from an Active Safety System may be the riskiest driving. By contrast, a “fixed event” capture would miss 10 seconds or more of that video. 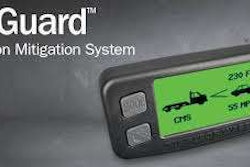