An FMCSA subcommittee this week made some recommendations to the agency to help mitigate the problems that arise when third-party groups like shippers, receivers, customers and the public at large use Compliance, Safety, Accountability rankings to make decisions or judgment about carriers.

The recommendations came in the second day of the FMCSA’s Motor Carrier Safety Advisory Committee’s CSA Subcommittee in Alexandria, Va. Click here to see coverage of the first day’s discussions.

The changes recommended by the committee largely promote better education and understanding for those unfamiliar with the scores but want to view them to make some determination about carriers. But as for hiding the scores from public view all together — as has been suggested recently by both the Government Accountability Office and the Department of Transportation Inspector General — FMCSA’s Bill Quade said the agency is stuck with the system it has now for some time.

The public nature of the scores wouldn’t be the frustrating issue it is if carrier rankings were more reflective of a carrier’s crash risk and overall safety, industry commenters noted in the Tuesday meetings.

However, an item that could a catalyst to make the system — and the publicity of the scores — more palatable for the trucking industry is the agency’s Safety Fitness Determination rule currently making its way through the arduous federal rulemaking process, but that rule is likely several years away from being implemented.

In the meantime, the agency should, the board recommended, “consider revising SMS’ public display to include”:

1) Examples of how BASIC ratings can be used to make interpretations about comparative crash risk between carriers with different ratings.
2) Address how the public should interpret carriers with no score in one or more BASICs in relation to carriers that do have scores.
3) Explanation of the primary purpose of SMS for enforcement and why BASIC ratings might not be the only way for customers to select a “safer” carrier.
4) Improved explanation of the measures scores (i.e., raw scores) and how they can or should be used by the public.

Darin Day, a subcommittee member and general counsel of Broker Tucker Company Worldwide, hammered on the difficulties brokers and shippers have with the system, particularly given the safety rating/SMS disconnect.

Day came to the second day of the April 29-30 meeting with a long list of “Satisfactory-rated carriers with four or more BASICs” at alert status, he said, as well as a somewhat smaller but still sizable list of Conditional-rated carriers with just one BASIC showing an alert. “Who’s safe? I have no idea,” he said.

Lisa Gonnerman of Ruan Transport said something needed to be done to communicate to shippers and brokers that the CSA SMS should not be considered the be-all end-all in carrier selection. “I think it’s even bigger than shippers and brokers,” she added, referring to those using the percentile-ranking SMS system to make business decisions about carriers. “It’s insurance companies, lawyers — it’s like our credit scores being out there for public view.”

Day called that “an interesting analogy,” making reference to a presentation on quirks of the percentile system that, as members of a carrier’s peer group change, or improve, a carrier’s “score ” in a BASIC may well go up, or get worse, even if that carrier is not doing anything different whatsoever. “It’s like my credit score falling because of what somebody else’s did out there.”

Day went on to describe the entirety of the CSA system as “a great idea for law enforcement, but I think, how do I use this? Every day we’re misinterpreting this.”

And as for the recommendations, if taking them up means further agency “encouragement” of public use of the data beyond law enforcement intentions, they could be problematic given ongoing litigation brought by the Alliance for Safe and Efficient Truck Transportation over just such encouragement. Transplace CEO Tom Sanderson, also ASECTT’s Chairman, commented on his view of SMS scores as having become, “largely due to FMCSA’s marketing campaign,” too much more than just a prioritization tool for law enforcement. 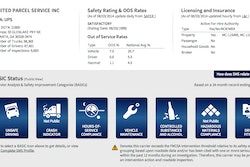