Slides from the 2014 Transplace Shipper Symposium session, “Survey Insights: Becoming a Shipper of Choice for Carriers.”

What makes a good customer? Carriers know, but too commonly they’re either not sharing their needs with shippers – or, more troublesome for the trucking industry, they’re too willing to compromise on terms and conditions that are against their business interests.

“Truckload carriers as a group – and I hate to be critical – have done a really poor job of presenting their case to shippers. They rarely go in with facts,” Ben Cubitt, senior vice president for consulting and engineering at Transplace, told CCJ in a recent interview. “The supply chain is becoming a very fact-based discipline. If you look at the railroads, they come in to shippers with a business case and they’ll have a giant marketing effort around why they need a rate increase.”

Carriers, however, too often rely on anecdotes rather than on efficiency data.

Of course, trucking is substantially more fragmented than the railroad industry and other modes.

On a 1 to 100 scale with monopoly at the bottom and a free-for-all at the top, Cubitt’s “off-the-cuff” estimates put the overall truckload market at a 95 and rail at 5, with parcel delivery just higher than rail. (He did hedge a bit, and suggested that “highly capable” truckload carriers probably warrant a 70, in terms of fragmentation.) LTL and intermodal and have also become more consolidated, with falling scores of 35 and 25, respectively.

“Shippers want to support carriers. They need a vibrant carrier base,” Cubitt said. “Their jobs depend on being able to get that capacity and they’re concerned about that.”

One solution: Carriers need to get on the same page when it comes to holding shippers accountable.

The talk with Cubitt followed a panel discussion at the 2014 Transplace Shipper Symposium session, “Survey Insights: Becoming a Shipper of Choice for Carriers.”

As a billion-dollar 3PL founded by a group of large trucking companies, Transplace has long emphasized the importance of cooperation between shippers and carriers.

And in response to customer requests, Transplace conducted carrier interviews and researched best practices to develop its Preferred Shipper Program, a tool to help shippers more clearly understand the needs of carriers – and to make the operational changes to meet those needs.

In doing the survey, Cubitt noted there weren’t many “aha moments”: carriers were well aware of most of the issues. (Slide 1)

“What struck me was that this is all about efficiency,” he said. “It wasn’t that drivers wanted a flat screen tv and a lounge, they just want to be treated with respect and for shippers to keep them moving. And that’s what carriers want, for shippers to support their network efficiency. They’ve got to have that. Costs are up significantly in an environment where it’s very difficult to get a rate increase.” (Slide 2)

The improvements can be as simple as on-site scales and even air lines, facility maps and driver updates on load status.

“I don’t think this is anything very exotic. I do think that as an industry, we need to look at the driver as a shared resource, and someone really critical to all of us,” Cubitt said. “The driver is a resource that’s an endangered species, so we cannot treat this lightly. Truckload carriers need to do a better job of educating shippers and being an advocate. Shippers then need to be prepared to act.”

Of course, such changes can mean “a difficult conversation” with middle management, admits Cubitt, who himself managed shipping for paper and packaging manufacturer RockTenn Co.

“It’s really about retaining that driver right now. If facilities are really difficult, if they hold up drivers, the word gets out,” Cubitt said. “You’re going to have a harder time getting that capacity.”

Scorecards for shippers are an obvious way to keep up with good and not-so-good customers. (Slide 3)

CR England was one of the carriers who participated in the survey, and COO Brandon Harrison explained that the company looks at two main areas when evaluating a shipper: network optimization/freight profitability (Slide 4), and “driver-centric processes” in shipping and receiving (Slide 5).

As for the former, CR England spends a lot time negotiating with new business, and won’t compromise on “deal-breakers,” Harrison emphasized.

He also noted the importance of “pre-bid activity” with existing customers, where the shipper works with the carrier to come up with an optimal solution for both parties.

“Customers aren’t necessarily looking for the most cost-effective solution. There’s a lot to be said for incumbency,” Harrison said. “This has worked out very well for us and many of our strategic partners.”

This process avoids high-pressure, last-minute bids that often result in “paper rates” that don’t translate into actual capacity, he added.

As for drivers, “the capacity challenge is only going to get worse” with additional federal regulation of the trucking industry, Harrison explained to the shippers.

“We have more drivers exiting the industry than entering,” he said.

And carriers must bear the increased cost of recruiting and retaining good drivers. At CR England, the cost-per-hire has risen 28 percent in the last year and a half – an expense that’s significant to begin with, Harrison added.

Likewise, headcount in the recruiting, training and compliance departments is up 32 percent to make sure the company puts “the right type of driver” on the road.

CR England has a formal process for evaluating how well drivers are treated at shipping facilities, along with other profitability measures, called the “customer value model.” With that information, operations and sales staffs work together to make sure customers are getting the feedback they need to improve driver conditions and network efficiency.

“Appointment times from a shipper standpoint are frustrating. And retailers continue to ratchet up the requirements around missed appointments,” Harrison said. “It’s clearly an area where we need a lot more dialogue, and I think we need some technology help as well.”

And shippers want to do “the right thing,” Cubitt suggested.

“We need to collectively come up with some checklists so a shipper can know what to look at,” Cubitt said. “It’s been such a good market for the shipper for eight or nine years, that we’ve carried everything to the extreme. It’s been easy to put somebody that’s 15 minutes late at the end of the line. Imagine if you’re that driver.”

Jeff Stites of Diamond Foods, who presented a shipper’s perspective on the panel, anticipates “a series of incremental steps” to address carrier concerns (Slides 6, 7) – but the real problem, as he sees it, is the retailers who are imposing “crazy things” on shippers and carriers.

“I don’t think there’s going to this big bang that’s going to fix the driver problem and make the job a lot more attractive. More shippers have to fix their networks and do all the things we can to make it better,” Stites said. “But we only have two-thirds of the equation in the room. It’s going to take getting the retailers and consignees to the table in a meaningful way – and I don’t think we’ve cracked the code on that yet. There just hasn’t been this reckoning that we’ve really got this problem.”

In the mean time, carriers need to do what they can to get the rates they need to be viable, profitable companies. 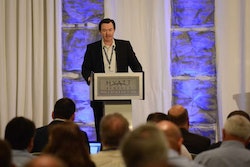 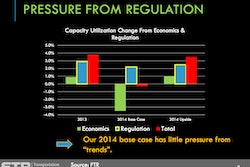