Trucking and logistics deals were on the rise in the third quarter, according to PricewaterhouseCoopers and its quarterly analysis of mergers and acquisitions. (Slide 1)

These smaller deals drove the increase in M&A activity for the sector, which also includes global infrastructure, air, and shipping industries.

“Acquiring carriers are seeking to expand truckload businesses, enhance logistics offerings, invest in technology and add new capacity as freight demand improves. In addition, several deals have helped companies improve their geographical reach within the United States and across North America,” PwC says. “However, trucking and logistics companies tend to be smaller than many other sector constituents, and deal multiples are also often lower.”

The same drivers appear to be in force this month, with demand improving and capacity exiting the marketplace at a rapid pace, as this year’s contract rate increases are starting to take effect, according to the report.

“We are not surprised to see our index continue to post mid-to-high single digit gains, and we expect this to continue through 4Q’14,” says Avondale Partners, the securities analyst firm that works with Cass on the report. “We continue to expect contract TL pricing to rise 4-6 percent in 2014, with the higher end looking increasingly likely.”

“We now expect intermodal rates to increase at a low single digit pace in 2014 as a tighter truckload environment offers an umbrella for higher pricing,” Avondale says. ”We would note that with diesel prices easing in recent weeks that our ‘all-in’ index could decelerate in the near term, despite indications that base rates are improving.”

Of the $4.2 billion increase in the value of US-NAFTA freight from the year before, truck freight contributed the most, $1.9 billion, followed by rail, $514 million. The trucking increase was due almost entirely to growth in truck freight with Mexico as U.S.-Canada truck trade remained almost unchanged, the report notes.

Trucks carry three-fifths of U.S.-NAFTA freight and are the most heavily utilized mode for moving goods to and from both trading partners. In Augsut, trucks carried 59.6 percent of the freight, accounting for $31.2 billion of exports and $28.8 billion of imports. 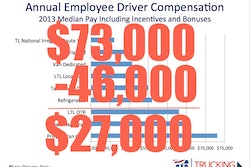