Virginia Tech’s Transportation Institute will head the Federal Motor Carrier Safety Administration’s federally required study on the the 34-hour restart provisions implemented in 2013, VT announced Feb. 3, and it’s looking for about 250 truck drivers to participate in the study.

A federal appropriations bill signed into law in mid-December put a stay of enforcement on the rules, pending the study. Congress stipulated in its bill that the study form two groups of drivers — one to abide by pre-2013 rules and one to abide by the 2013 provisions.

The drivers must be studied for at least five months, and researchers will compare their schedules, crashes, near-crashes, crash-relevant events, operator fatigue and alertness and short-term health.

The report must be reviewed by the DOT’s Office of Inspector General, and it must be submitted to Congress once finished. If the agency concludes the 2013 rules are better for safety and operator alertness, they will go back into effect.

The agency announced in the middle of January it was looking for driver participants for the study, and Virginia Tech offered this week more details: It says it will recruit roughly 250 drivers from small, medium and large fleets from a variety of operations and segments.

VT will use electronic logging devices, “high-tech watches” and other tools to gauge fatigue levels, it says.

VT will produce the final study report for the agency, too.

Click here to fill out a form to participate in VT’s study. 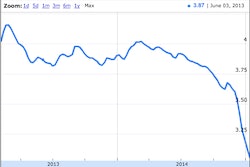