The DOT, pressing Congress for a long-term highway funding bill, has brought back its highway bill doomsday clock, an interactive chart that shows the cash flow of the country’s highway funding account and the projected date the HTF will go bankrupt.

That projected date, as of May 29, looks to be before the end of July, and the ticker could seen an update next week when the DOT closes its books for June. Barring Congressional action, the DOT will have to halt funding to state agencies when the Trust Fund hits zero, meaning highway projects already in the works around the country could stall and new projects further delayed.

Congress’ most recent highway funding action came in late May, when lawmakers passed — at the very end of the 10-month extension it granted itself last year — a 60-day extension of current highway funding levels, ensuring Highway Trust Fund solvency until the end of July.

But pressure continues to mount on Congress to produce a long-term bill, from both sides of the political aisle and from major private sector industries, like trucking and construction, that depend on highways and highway funding to do their jobs.

Here are a few highway funding highlights from the recent week:

“Plain and simple” — no gas tax increase: Rep. Paul Ryan (R-Wis.) last week declared Congress would, “plain and simple,” not raise the gas tax — a measure long fought for by the the American Trucking Associations.

ATA’s President and CEO Bill Graves, who also testified at the House hearing that Ryan chaired, argued increases to fuel taxes are the most appropriate, fair and viable way to fund U.S. highways.

“An increase in the fuel tax, with indexing, can meet current and future highway investment needs,” he said. “While the trucking industry already makes a substantial contribution to the Highway Trust Fund, clearly federal investment is falling short, and we are therefore willing to support an even greater commitment. We know the fuel tax works…it would continue to be viable for years if the rate were raised. It’s hard — I still believe the fuel tax is the lesser of all funding evils.”

DRIVE Act set: Sens. Jim Inhofe (R-Okla.) and Barbara Boxer (D-Calif.) are set to introduce this week the Developing a Reliable and Innovative Vision for the Economy Act, or DRIVE Act. The bill is a six-year highway funding measure being billed as bi-partisan effort. Stay tuned to CCJ for more details following the bill’s introduction.

Senate’s DOT appropriations bill: The Senate is expected this week to pull out its version of a DOT-funding bill for 2016. The bill could contain provisions related to trucking regulations, such as the House bill’s inclusion of a continuation of the current hours-of-service rollback, barring FMCSA from pursuing an insurance increase for carriers, ending investment in wireless roadside inspection technology and permitting 33-foot double trailers.

Several major trucking fleets, however, sent a letter to key transportation Senators last week asking them to oppose any amendments or language in the upper chamber’s DOT-funding bill that would allow 33-foot doubles.

Crumbling roads make NPR’s Marketplace: Take a listen in the player below or click here to read the corresponding story for NPR’s coverage of the need for a long-term infrastructure bill. The public media outlet points to the sheer size of the U.S. surface transportation system as what makes it both so admirable and so unwieldy. 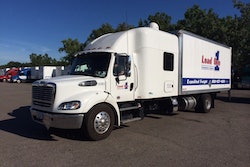 Load One renews with Sylectus for TMS, adds Truckload Module