With just 20 Congressional days remaining until the country’s current short-term highway funding patch expires — the date the U.S. DOT must cut off funding for highway projects — Secretary of Transportation Anthony Foxx has sent (for the second time in 10 months) a letter to state DOTs warning them their checks for federally backed highway and bridge projects will run dry May 31.

That is, unless Congress acts to prop up the Highway Trust Fund with another short-term patch.

Congress will pass a short-term patch. The only questions are (a) what day this month they’ll get to it and (b) whether the patch will fund the HTF through September, December or next May.

This will be the 33rd such short-term patch in the last six years, despite pressure from basically every lobbying or advocacy group that has any skin the game — which is a long, long list — to pass a bill that actually addresses the country’s surface transportation needs.

Congress, however, seems apathetic, at best. At worst, it would appear like they’re just twisting the arms of those that use U.S. roadways (see: all of us) until we again say “Uncle” and are content with a short-term patch to ward off HTF bankruptcy.

The American Trucking Associations just this week called “Uncle” in the current bout with lawmakers. It’s now asking Congress, after months of pleading for a long-term bill funded by a fuel tax increase, to go ahead and do what we all knew Congress would do all along — pass a short-term measure.

Wrapping a bow around this impending showdown between a Congress that won’t act and a nation begging for Congressional action is Infrastructure Week, the timing of which couldn’t sum up the country’s infrastructure woes any better.

Per its website, Infrastructure Week is a five-day period in which 80 groups “from business, labor and advocacy are convening around America to host more than 40 events and bring a strong message directly to Congress that America cannot wait for long-term solutions to infrastructure investment and revitalization.”

While these groups hold conferences, phone lawmakers and attempt to educate the motoring public — all with the focus on long-term infrastructure planning and spending — Congress will be working on the next piece of bubble gum to plug the hole in the dam wall.

All the while, highways become more unusable, bridges become more deficient, commerce suffers, congestion increases and the U.S. loses a little more of its footing at the top. 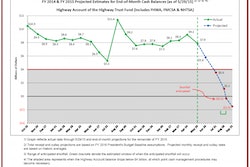