The Department of Energy last week announced $137 million in grants to heavy-duty engine and truck manufacturers for the development of the next SuperTruck iterations, awarding $20 million each to Cummins, Daimler (maker of Freightliner), Volvo and Navistar (maker of International).

The DOE announced the SuperTruck II program earlier this year. The goal, it says, is to double so-called freight efficiency on Class 8 tractor-trailers by driving down fuel consumption. The program follows up on the original SuperTruck program, which handed out the same $20 million to major truck and engine makers in 2010 to improve fuel economy over 2009 tractor-trailers by 50 percent.

The SuperTruck II “teams,” as the DOE dubs them, will each be responsible for developing different technologies.

Cummins is tasked obviously with developing new technologies to advance engine and drivetrain efficiency. Daimler, meanwhile, will concentrate on full tractor-trailer aerodynamics, hybridization and electrification of engine accessories. Navistar will work on electrified engine components and cab aerodynamics. Volvo is set to work on lightweighting and “using alternative engine designs,” the DOE says.

The original SuperTruck program resulted in three futuristic, highly aerodynamic tractor-trailers, one each built by Freightliner, Navistar and a Peterbilt-Cummins partnership. 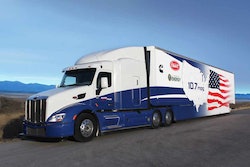 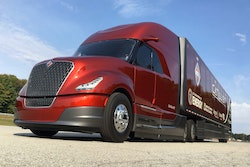 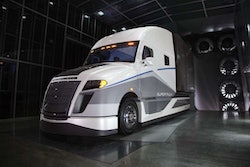