Given the high truck build rates in 2014 and 2015, the market for 3- to 5-year-old tractors is set to be flooded in the coming few years, a supply-side pressure that will continue to put downward pressure on used truck prices, said Arrow Truck Sales President Steve Clough.

“Used truck supply goes a long way in determining the environment” for pricing, Clough said. “The supply of used trucks has already been determined based on what was retailed 3, 4 and 5 years ago. That’s a wall of inventory that’s coming.”

“The amount of trucks I anticipate coming back as used trucks for the first time will continue to grow,” he said. “It will probably peak in 2019 or 2020. Increasingly, supply will continue to put downward pressure on pricing.”

In recent years, used truck pricing had been accelerating, as the low truck builds of the Great Recession and after — 2008, 2009 and 2010 — capped the used market’s supply. The new truck build rates of those years caused a  “shrinking, shrinking, shrinking” supply until 2013, Clough says, when the market stabilized some.

Used truck demand jumped into the pricing equation in 2015, when freight and rates began fizzling. Since the middle of last year, both truck supply and truck demand caused used truck prices to begin tumbling. 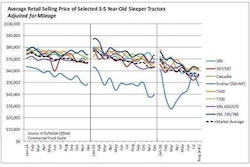 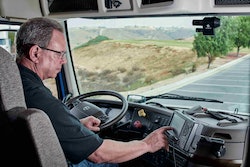