Anheuser-Busch held that distinction for nearly a week, confirming their order of 40 Tesla tractors five days ago.

PepsiCo brings the total of Tesla trucks on the order books to at least 270 since the tractor debuted nearly a month ago.

“We are still determining how best to deploy the trucks across our snacks and beverage businesses,” a company spokesperson told CCJ Tuesday morning. “For this technology to succeed, it’s critical to have a national infrastructure for electric charging capacity to make the industry viable, and we look forward to supporting the development of that infrastructure.”

Food wholesaler Sysco has placed an order for 50 Tesla Semis. J.B. Hunt has 40 Tesla tractors on order and retail giant Walmart also disclosed it has placed reservations for 15 trucks, deploying five in the U.S. and 10 in Canada. Canada is becoming a hotbed for Tesla Semi early orders. Canadian grocery chain Loblaw announced it would order a total of 25 of the new all-electric tractor as it works to convert its entire fleet to battery power by the end of the decade. 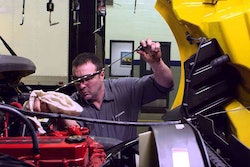