The trucking industry employs 7.4 million Americans, including 3.5 million drivers. ‘Truck driver’ is the No. 1 occupation in 29 states and one out of every 16 jobs in the country. But it won’t be enough to keep up with the growing demands being placed on the trucking industry, said Chris Spear, American Trucking Associations president and CEO, during a town hall address to fleet maintenance executives and industry suppliers at the 2018 ATA Technology & Maintenance Council Annual Meeting in Atlanta.

Citing a robust economy, the largest tax form package in more than 30 years and higher freight rates, “The ingredients are in place to pave a wonderful future for this industry, said Spear. “But we are now seeing the demands on trucking to grow and support this economy, and it exposes some of our weaknesses.”

With a current shortage of 50,000 drivers, Spear said a concentration on workforce development and advocating new labor laws is essential to helping the trucking industry serve the economy. The industry could experience a shortage of 176,000 drivers by 2026, requiring trucking companies to hire 960,000 drivers in the next decade to keep up with demand.

“That’s no small undertaking, and we need to stop talking about this problem and start solving it,” said Spear.

ATA is driving the push for a sensible graduated program to allow carriers to hire drivers between 18 and 21 years old as truck drivers.

“The fact we can’t hire 18- to 21-year-olds to drive freight across states line but we can send them to war and operate multi-million-dollar pieces of equipment is a policy that has to be addressed,” said Spear. “We will advocate a solution that nurtures, mentors and graduates them into a commercial driver’s license and gives us the opportunity employ that three-year block of talent at an earlier stage.”

Spear said advancements in truck-related technology – including autonomous driving – offer new avenues for attracting younger workers into the industry, but errant media reports of Level V (driverless) automation in the near term can turn people away from a career behind the wheel.

“We need to embrace innovation, not fear it, and have it serve as a catalyst for the problems we face,” said Spear. “Technology has the ability to attract younger talent, but if not taken in realistic fashion, it could drive people away,” adding that driverless trucks are a long way from reality. “You still are going to need a driver to handle driving in cityscapes, pickup and delivery at shippers and receivers and handle the unexpected on the road.”

Spear said another threat to trucking’s ability to serve the economy is the nation’s aging infrastructure.

“To have the ability to operate equipment without disruption and reduce maintenance costs from deteriorating roads and faulty bridges, it is critical we begin investing in the backbone of our economy. Good infrastructure is good policy,” said Spear.

Spear took the opportunity to again tout ATA’s Build America Fund that calls for an annual 5-cent increase in fuel over the next four years to help fund federal infrastructure improvement plan.

“It will shore up the Highway Trust Fund, it is deficit neutral, and would generate $340 billion in revenue over the next 10 years,” said Spear. 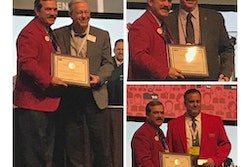 Diesel prices dip below $3 a gallon