Effective immediately, the Federal Motor Carrier Safety Administration will allow drivers to enter into personal conveyance status, whether the truck is loaded or not, to find the nearest safe parking or rest location after their hours of service are exhausted by a shipper/receiver or off-duty periods are interrupted by law enforcement.

“The movement from a shipper or receiver to the nearest safe resting area may be identified as personal conveyance,” according to a notice from FMCSA, “regardless of whether the driver exhausted his or her hours of service, as long as the CMV is being moved solely to enable the driver to obtain the required rest at a safe location.”

The change was prompted by more rigid hours of service compliance brought on by the agency’s electronic logging device mandate.

In a media call Thursday, FMCSA Enforcement and Compliance Director Joe DeLorenzo emphasized a key point that might apply more broadly to other scenarios where personal conveyance for the purpose of getting “to your safe place to rest. It’s all about why you’re making that particular movement,” in the end.

Any driver using personal conveyance this way is advised to “annotate on the log if he/she cannot park at the nearest location and must proceed to another location.”

Personal conveyance is also newly specifically allowed in other similar circumstances, the agency noted — when a safety official (such as a law enforcement officer) requires a driver to move during an off-duty period. Such a use should be “no farther than the nearest reasonable and safe area to complete the rest period,” according the Federal Register publication.

Travel to home after working “offsite,” as long as the driver’s home is not in the direction of the current or next dispatch, is also explicitly allowed as personal conveyance by the new guidance.

Guidance changes will be published in the Federal Register probably “early next week,” DeLorenzo said, but he added that the agency had already rolled them out to law enforcement.

Ag hours-exemption guidance changes
FMCSA also announced Thursday changes to guidance around the 150-air-mile-radius ag hours of service exemption include clarifying the definition of the radius as extending from the commodity’s source — and the definition of source, which would include locations like silos and sale barns where the commodity is put on the vehicle. The guidance defines source in part to include not just a farm or ranch but also “any intermediate storage or handling location away from the original source at the farm or field, provided the commodity retains its original form and is not significantly changed by any processing or packing.”

Likewise, the agency said, haulers utilizing the exemption but who extend beyond the radius would not need to start hours recording until they reached the edge of the radius.

“The hours accumulated within the 150-mile radius are not counted toward the driver’s hours of service,” FMCSA says. “Returning empty, the driver would be subject to the HOS rules until returning within the 150 air-mile radius in which the trip began.”

Such drivers returning empty to the source, thus, would be able to stop hours recording upon re-entering the radius. DeLorenzo also clarified that for multiple-stop loads within the radius, point A of pickup would be the source from which the 150-air-mile (about 176 road miles) radius should be calculated. 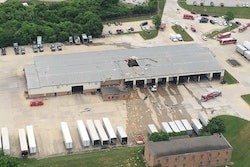