The family tree for Internet of Things was planted in the trucking industry long before the term was invented.

For more than 20 years, fleets have been using telematics, the granddaddy of IoT, to stay connected with vehicles and drivers. The electronic logging device (ELD) mandate accelerated the use of IoT in the industry, at least for trucks. Now attention has turned to the trailer.

Trailer telematics has become one of the fastest growing branches of IoT, with subscriptions expected to increase by more than 16 percent each year through 2022, according to a recent study from telematics research and consulting firm C.J. Driscoll and Associates.

Every year, shippers spend $800 billion on transportation and logistics for goods worth an estimated $14 trillion. The money is in the cargo, and these five new developments in trailer telematics are poised to give carriers and their shipper customers greater visibility of cargo while improving operating efficiency.

Phoenix-based Tri-State Motor Transport Co. (TSMT), part of the Roadmaster Group, provides specialized and secure transport of high-value loads with a fleet of more than 400 team drivers and 2,000 van and flatbed trailers.

The company uses the Omnitracs TT210 trailer tracking system for its van trailers and the Spireon Fleet Locate FL Flex system for its flatbed trailer fleet.

The Omnitracs system meets tracking requirements for a large customer, the Department of Defense, says Frank Larance, director of IT and asset utilization.

With the Omnitracs system, TSMT has door sensors that detect open/closed status. TSMT pairs door status with dispatch data to automatically alert fleet managers and customers if doors are opened at unauthorized locations.

The company mainly uses the two systems to improve efficiencies such as notifying customers if trailers are detained while loading or unloading.

“We want to get the assets back in our system for a variety of reasons,” Larance says. “The last thing we want to do is bill you for it.”

Presently, TSTM does not use sensors to detect the presence of cargo. Larance is interested in new cargo sensors that have imaging and laser technology to accurately determine loaded and unloaded status. He also sees value in the technology for taking pictures to share with customers and identify maintenance needs.

“I would love to see inside of a trailer,” he says.

Cargo sensors are one of many new developments in trailer telematics that fit a “smart trailer” concept where a hub, or gateway, gathers the status of cargo and trailer components.

“It’s like having an eye in the trailer,” says Reza Hemmati, the company’s vice president of product management, fleet and asset intelligence.

Spireon is also developing new dashboards for fleet managers to have maintenance and operational metrics from the integrations it has with tire pressure monitoring and auto-inflation systems and trailer components such as lights and brakes.

“The biggest focus is to get more information off the trailer,” Hemmati says.

SkyBitz, which has anywhere between 35 and 50 percent of the trailer telematics market, will soon be updating its cargo sensor with imaging technology and algorithms that will detect loaded capacity, says Henry Popplewell, president of SkyBitz.

Other smart trailer capabilities from SkyBitz include reporting alerts from PSI, Meritor and Bendix systems on trailers that measure tire pressures, axle temperature and brake wear.

“We ramp up reporting frequencies,” Popplewell explains, to “look at the big picture of the fleet versus being dependent on drivers” for reporting trailer and cargo conditions.

Looking ahead, predictive analytics will be the next evolution of the smart trailer to identify failure points for brakes, axles and lights in advance, he says.

Door and cargo-area environmental sensors are also available, along with sensors that monitor tire pressure and anti-lock braking system lights.

BlackBerry takes a different approach with its Radar platform. Rather than place wireless sensors in and around a trailer, Radar uses a self-contained device with seven internal sensors that capture location, mileage, temperature, humidity, barometric pressure, cargo and door status.

BlackBerry Radar’s infrared cargo sensors and a learning algorithm reports a trailer’s loaded status in increments of 10 percentage points. The unit installs on the inside door of a trailer and the cargo sensor automatically takes a reading when the door closes, explains Kate Rahn, vice president of sales for Blackberry Radar.

The mobile device records location and sensor data in 5-minute increments. The data record is wirelessly transmitted to the cloud-based system in intervals that preserve battery life for up to eight years, she says.

Monitoring the status of cargo in transit and at exchange points in a supply chains has become critical for high value shipments and perishable cargo.

Since April 2017, shippers and carriers have had to comply with the Food Safety Modernization Act (FSMA). Shippers and brokers are asking carriers to document compliance with their load instructions. Shipments are more susceptible to cargo claims if temperatures and other records do not measure up.

Digi has a subscription-based IoT platform, SmartSense, that uses wireless Digi Data Logger sensors that are the size of casino chips and can be placed in direct contact with cargo to maintain an accurate record.

The data loggers are certified by the National Institution of Standards and Technology (NIST) as within a half degree of reality. The sensors last between three and five years and are “very affordable,” says Ron Konezny, president and chief executive of Digi.

SmartSense has a wireless Digi gateway device that attaches to a trailer, a warehouse, dock door or other exchange points in supply chains to read sensor data and send it to the cloud-based platform.

SmartSense monitors temperature, shock, humidity and vibration of cargo while giving carriers all of the most common features of trailer telematics such as location tracking and door sensors.

The Digi sensors and gateway allow temperature and other cargo data to be monitored, logged and retrieved independent of the mode of transport, he explains.

During transit, temperature and other cargo data can be interrogated using an app on a smartphone or other device using a Bluetooth connection with the gateway. The data transmission takes place using Bluetooth, Wi-Fi and cellular networks.

One of Digi’s customers, RaceTrac convenience stores, is installing SmartSense in its stores, trucks and distribution centers to have complete visibility of cargo conditions. Another Digi customer, Haagen-Dazs ice cream, uses Data Loggers to track the condition and chain of custody of its products on trucks, trains, boats and airplanes.

Verizon Connect recently announced a new device for tracking trailers and other powered and non-powered assets. The device provides near real-time location alerts in the event of significant changes to the asset’s temperature, tilt, vibration, shock, humidity, light and pressure.

The ability to monitor cargo conditions is especially useful for high-value trailer loads. With secure wireless data encryption, settings for the device are configured over the air. The device can be recharged via USB and has a low-power processor to extend its battery life.

Carriers with refrigerated operations no longer have to rely on drivers to check and monitor reefer units to protect against cargo claims.

“It does not take much to lose a load with a missed (temperature) setting,” says Scott Flerl, director of equipment procurement at Covenant Transportation Group (CTG).

For more than a year, CTG has been using a telematics platform from Orbcomm on its reefer trailers. The platform has remote control features with reefer units that allow managers in the office to set temperatures and turn units on and off.

“Before that, we relied on the driver to tell us if something goes wrong,” he says.

Orbcomm offers a portfolio of trailer tracking and monitoring products for all types of equipment — dry van, refrigerated, tanker and intermodal chassis.

By bringing the different systems together, fleets with multiple equipment types across geographies can have all of their data in single dashboard and platform.

CTG uses Spireon for its dry van trailers and decided to build a trailer management system that gives managers “one place to do everything,” he says. The system marries up trailer and dispatch information to alert users if a reefer temperature setting does not match the customer’s requirement on an order.

Users are alerted to other exceptions captured by the Orbcomm platform such as reefer units running low on fuel or not performing correctly.

Modern trailer telematics systems report location and other data in a near real-time frequency without sacrificing battery life.

The SkyBitz units are mounted under the chassis of tank trailers. Tracking data from SkyBitz is integrated with its back-office systems to give shippers visibility through a web-based platform Heniff calls the Freight Portal.

Web-based and mobile-friendly, the portal gives customers ETAs of shipments as well as automatic notifications when detention events occur, he says.

Overall, the use of trailer telematics has made Heniff “a lot more efficient,” Neal says. During the past six months, Heniff has installed SkyBitz in the trailers of two companies it has acquired and plans to have 3,000 trailers equipped.

“With geofencing, you don’t have to do that. You know when you are short and when have too many (trailers),” Flerl says.

Trailer pool information helps CTG when buying and selling equipment. Management can identify which locations to pull trailers from. On a larger scale, management controls trailer pools to ensure that assets are positioned strategically in its network.

“Now we can attack (network imbalance) before it gets so out of hand,” he says. “We can be far more proactive instead of reactive.”

CTG has a driver mobile app that shows drivers a Google Map of the locations of assigned trailers in drop yards within 30 feet of accuracy. The app saves time and frustration for drivers while boosting trailer utilization.

The app is immediately updated with dispatch information to prevent scenarios where drivers are “driving around looking for something that is not there,” Flerl says. 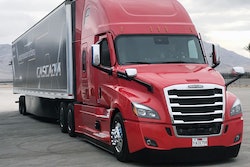 Trucking conditions rebound, but expected to weaken later this year