Attendees at the Great American Trucking Show later this week will have the opportunity to chime in on the recently proposed hours of service changes, check out new-model trucks, learn more about the transition from automatic on-board recording devices to electronic logs and more.

GATS will be held Aug. 22-24 at the Kay Bailey Hutchison Convention Center in downtown Dallas.

FMCSA’s proposed hours changes add flexibility for drivers by allowing them to take up to a three-hour break during the day that stops their 14-hour clock. Drivers can also split their off-duty sleeper berth time into two periods of seven hours and three hours. Read more on the proposed changes here.

On display at the show in the New Truck Pavilion will be a number of new trucks, including a Volvo VNL 760, Volvo VNL 860, Mack Anthem, Kenworth W990, Kenworth W900L, Freightliner Cascadia, International LT, Peterbilt 579, Peterbilt 389 and more.

In addition to its listening session on hours of service, FMCSA will also hold sessions on Thursday and Saturday billed as “FMCSA Hot Topics: ELD implementation and Transition, The Drug and Alcohol Clearinghouse and more.” The deadline for AOBRD users to make the switch to ELDs is Dec. 17, so that topic will be part of the agency’s presentations.

Those interested in attending the 2019 Great American Trucking Show can register for free online here. 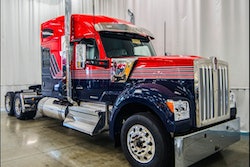 New model trucks on display at GATS next month 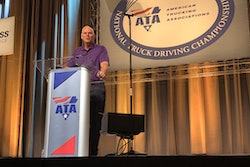