NTDAW is a week dedicated to celebrating truck drivers in the U.S. spearheaded by the American Trucking Associations. ATA says the week is coordinated each year to show the country’s 3.5 million truck drivers that carriers, shippers and the rest of the industry appreciate the job they do.

Some of the initiatives ongoing this week from industry groups and carriers include:

American Trucking Associations: ATA and Peterson Manufacturing will award $1,000 each to 10 professional truck drivers who have undergone hardship during the coronavirus pandemic during NTDAW.

This initiative comes as a part of Peterson Manufacturing’s recently unveiled campaign for NTDAW, Shining the Light on America’s Truck Drivers, which highlights and honors the crucial role truck drivers have played during the COVID-19 pandemic.

To nominate a driver who experienced financial or other hardships during the ongoing COVID-19 pandemic, click here to share the story of a deserving candidate. Drivers can also self-nominate themselves by sharing their stories.

Drivers will be selected by a panel of independent judges. By Sept. 20, the Spotlight Award will be given to the deserving nominees who will be contacted individually.

The event will feature numerous “thank you” messages to truck drivers from television entertainers and well-known musicians; changes for drivers to win giveaways; a special announcement and recognition from Wreaths Across America; a special announcement and recognition from the Vietnam Veterans Memorial Fund; and a special performance from the U.S. Army Field Band’s Six-String Soldiers.

Baylor Trucking: The Indiana-based carrier is holding a special VIP event on Sept. 19 to celebrate its 75th anniversary and to recognize professional truck drivers as part of NTDAW. The Milan, Ind.-based company was founded in 1945 by World War II veteran Chester Baylor with one truck and continues today with Cari Baylor as its third-generation family leader.

The event will include a catered meal and 11-piece band with large cakes, champagne and personalized masks. All drivers will be awarded gifts and have their names entered into a raffle to win exceptional prizes.

During the event, Baylor Trucking will announce the winning drivers who will be assigned 75th anniversary trucks with premium exterior and interior specs that include special paint colors and decal packages; chrome bumpers; interior desks and personalized seat covers, among other features.

On Monday, Sept. 14, Cari Baylor joined members of the Indiana Motor Truck Association for a special NTDAW proclamation to the Indiana state legislature.

Instead of its normal annual event, the company is hosting social media chats and other live events; releasing exclusive Schneider Buzz videos, fleet messages and content on the Schneider Compass app; distributing gifts to drivers at company facilities; and offering Pilot app perks, including additional Pilot Points and a free drink.

All Schneider drivers will be entered into drawings for prizes, including iPads, heated lunch boxes, deluxe truck organizers, Bluetooth speakers, and certificates for Loyalty points to the company store.

Landstar: Landstar System this week will announce the winner of its 2020 Deliver to Win Giveaway, who will receive a new pearl blue Freightliner Cascadia that’s powered by a 14.8-liter, 455-hp Detroit DD15 with a Detroit DT12 automated transmission.

The winner will be announced Friday, Sept. 18, during a Zoom conference. Every eligible owner-operator leased to Landstar automatically earns one entry for every 10 loads safely delivered during the contest period. Throughout the year, drivers have multiple opportunities to earn additional entries to increase their chances at winning the truck, including monthly contests held via DeliverToWin.com.

Averitt Express: As part of continuing efforts to show appreciation for all employees, Cookeville, Tennessee-based carrier Averitt Express will celebrate Driver Appreciation Week with numerous events throughout its network.

“This year has presented very unique challenges, and I’m incredibly proud of how our team has reacted, adapted and persevered,” said Gary Sasser, Averitt’s chairman and chief executive officer. “Because of the efforts of our entire team, we’re well-positioned for success, and Driver Appreciation Week is a great opportunity to reaffirm how thankful we are for our associates.”

Averitt has also produced a special video recognizing the importance of its associates.

U.S. Xpress:  In lieu of parties and cookouts, the Chattanooga, Tennessee-based carrier is going totally virtual in recognizing its more than 6,500 drivers during NTDAW this year. The week’s activities include:

Wilson Logistics: Wilson is recognizing its drivers throughout the week by offering a meal reimbursement up to $25 for all of its drivers, as well as breakfast or lunch at terminals all week.

The company is also giving away free swag at its terminals, including pop sockets, koozies, 30-ounce tumblers and ball caps. Wilson drivers have also been entered into a random drawing that will be held each day this week.

Finally, the company will be hosting barbecue lunches at six terminals on Friday.

Maverick Transportation: The Little Rock, Arkansas-based carrier is honoring drivers this week through daily giveaways that are drawn randomly from the fleet Monday through Thursday.

A grand prize giveaway will be held Friday from drivers who submit a photo to win. Maverick drivers are asked to take and post a selfie and tag two other drivers or securement workers on this Facebook post by Thursday at noon Central time. 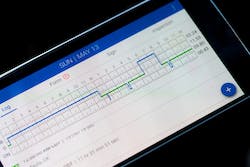 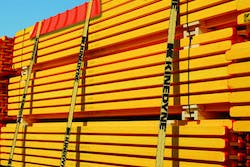 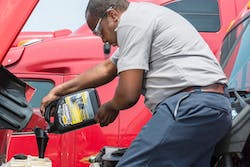 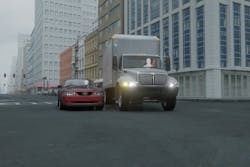 Truck driver’s attempt at a wide-left goes awry as sports car sneaks up — Preventable or not?