The winner of the award will receive a Kenworth T680 with a 76-inch sleeper that’s powered by a Paccar MX-13 and Paccar 12-speed automated transmission with Paccar 40K tandem axles.

The 10 finalists for the award are:

“Our 10 finalists represent a wide variety of military branches and occupations and are excellent examples of what military talent can bring to the trucking industry,” said Brad Bentley, Fastport president. “Culling the list of nominees to the top 10 was a difficult task, one not taken lightly. These finalists are outstanding and truly show the best of the best.”

Drivers were nominated by trucking companies that made a hiring commitment and pledge to hire veterans, by members of the National Association of Publicly Funded Truck Driving Schools, or a Commercial Vehicle Training Association-member school.

“This expansion of the Alerts system on PrePass Motion gives drivers very important information to keep them safe and on time as they travel down the road,” said Mark Doughty, president & CEO of PrePass Safety Alliance. “Working in collaboration with our state agency, enforcement and trucking industry partners, PrePass was the first bypass platform to offer these safety enhancements, and we expect more growth in the program soon.” 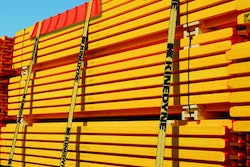