The United States Supreme Court on Monday invited the Solicitor General to file a brief expressing the federal government’s views on whether the Supreme Court should hear California Trucking Association’s suit claiming federal law preempts California’s AB 5 for the trucking industry. AB 5, if applied to trucking, would effectively ban the leased owner-operator model in California.

According to Transportation specialists Scopelitis, Garvin, Light, Hansen and Feary, “it is not uncommon for the [Supreme] Court to ask for the Solicitor General’s views on matters of federal preemption.” The Solicitor General is the federal government’s representative before the Supreme Court.

There is no deadline for the Solicitor General’s brief to be filed. After it is filed, SCOTUS will meet again to determine if it will hear the AB 5 case.

The AB 5 bill, which institutes the restrictive ABC test for determining independent contractor status, took effect in California in January 2020. A federal district court, however, granted an injunction that exempted the trucking industry from the law.

The Ninth Circuit Court of Appeals has since ruled that AB 5 was not preempted by the Federal Aviation Administration Authorization Act of 1994. The Ninth Circuit then granted a stay of the injunction while appeal is sought in the Supreme Court.

The injunction should remain in place while SCOTUS awaits the Solicitor General’s brief, Scopelitis said.

President Joe Biden on Monday signed his $1.2 trillion infrastructure plan, providing $110 billion for roads, highways and bridges, along with money for the buildout of an electric vehicle infrastructure, water projects, the expansion of high-speed internet service, environmental cleanup and public transit. It also creates a training and apprenticeship program for under-21 commercial drivers to haul interstate.

H.R. 3684, the “Infrastructure Investment and Jobs Act,” which reauthorizes surface transportation programs for five years, through Fiscal Year 2026, and provides for a one-time transfer of funds from the General Fund into the Highway Trust Fund; authorizes programs for water, energy, and broadband infrastructure; and provides emergency supplemental appropriations.

"America is moving again," Biden said, "and 50 years from now, I truly believe they will say this was the moment we won the competition for the 21st century."

Uber Freight on Monday completed the acquisition of Transplace from TPG Capital for approximately $2.25 billion in an all-cash transaction. As partial financing for this transaction, Abu Dhabi Growth Fund (ADG), D1 Capital, and GCM Grosvenor invested $550 million in Uber Freight.

The transaction brings together Uber Freight’s network of digitally-enabled carriers with Transplace’s shipper technology and operational solutions, ultimately creating one of the world’s leading logistics technology platforms to meet the rapidly evolving needs of shippers and carriers alike.

Head of Uber Freight Lior Ron said by acquiring Transplace his company was able to "accelerate our vision for a seamless freight ecosystem and create the world’s first true freight operating system. Combining the leading shipper network and the largest digital network of carriers will enable us to immediately unlock new opportunities and efficiencies for everyone in the value chain — shippers, carriers, and ultimately society at large.”

Both companies claim the partnership will unlock deep efficiencies and insights across $16 billion of Freight Under Management (FUM) and help reduce transportation costs, improve service, automate processes and streamline the execution of freight for shippers of all sizes. The combined networks of Uber Freight and Transplace will also form the world’s largest network of digitally-enabled carriers with a combined reach of 135,000 high quality carriers operating across an expanded set of services throughout North America and Europe, including intermodal, cross border, expedited, and more.

Great Dane Trailers is recalling approximately 200 model year 2020-2022 Everest, Champion and Freedom trailers for an issue related to the anti-lock braking system on the trailers, according to National Highway Traffic Safety Administration documents.

Great Dane says the screws that secure the bracket cover and end cover of the iABS unit may have been improperly tightened, which can allow the screws to loosen and back out, resulting in a loss of pressure in the unit. A loss of pressure can cause loss of brake function.

Approximately 79 model year 2021 Mack Granite and LR trucks are being recalled due to a machining defect that can cause pressure to build in the power steering pump and break the shaft seal, resulting in a loss of power steering assist.

Dealers will replace the power steering pump for free to remedy the issue. 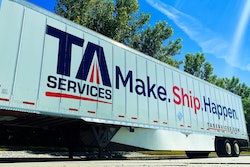