Hotter temperatures can lead to increased tire wear and blow-outs, experts warn, which makes maintenance during the summer months all the more critical.

“Heat is the number one enemy of the tire, so summer heat can make it a tougher battle to keep tires running at acceptable operational temperatures,” said Penske Truck Leasing Senior Corporate Tire Manager Charles Sena.

Truck tires that are properly inflated on a cool morning will heat up as they’re rolling down the road and will get even hotter as the sun raises both ambient and road temperatures.

“As temperatures increase, air pressures will naturally climb,” Sena continued. “So, tires that were properly inflated at 90 degrees may be overinflated if ambient temperatures reach 110 degrees.”

A rule of thumb, according to Michelin North America Product Manager Jim Garrett, is that tire pressure will increase 1 psi for every 10-degree increase in air temperature. Too much air pressure leads to overinflation and puts tires at greater risk.

“This could cause poor tire performance in terms of wear (increased center wear) and traction (smaller footprint),” Garrett said. “Increased pressure and temperature also puts a strain on previous tire repairs and may lead to more failures.”

“Heat can cause an overall faster rate of wear and make tires more susceptible to irregular wear,” Keating said. “In high scrub applications, the hit in wear rate can be very large.”

Higher temperatures can also weaken casings, which may make a tire unsafe to retread.

“Excessive heat has a high potential to cause damage to the tire casing, which may prevent the casing from being retreaded; however, the most important risk factor of overheated tires is the potential for a blowout,” said Mark Finger, senior vice president of maintenance and operations at Transervice.

“Obviously, this can adversely affect the safety of both the driver and other motorists on the road, as an unexpected tire failure can put all nearby drivers and passengers at risk of an accident,” Finger continued.

In addition to hotter ambient temperatures, Continental Tire U.S. Vice President of Truck Tire Sales and Marketing Tom Fanning pointed out that roads baking in the sun, particularly those that are rough and poorly maintained, can crank up the heat even more.

“Hot poorly maintained roads can increase the heat buildup in tires,” Fanning said. “It’s an uncontrollable factor that fleets need to be aware about, especially during the summer months.”

If not addressed in time, tires will begin to show signs of heat damage and become more at risk for failure.

In addition to excessive wear, which can be irregular and prone to center wear from overinflation, there are other signs too.

“Tread tearing and chunking,” Garrett said. “This can be an indication of the tread getting too hot.  Sometimes you can even notice a blue tint to the rubber, also an indicator of excessive heat.”

Fanning said once it’s clear a tire has suffered heat-damage, there is no fix.

“Damage to tire casing, cuts, cracks, bulges, irregular wear, penetrations and high rolling resistance. Once tires are damaged by heat, the impact is irreversible,” he said.

“Irregular tire wear (especially in the center of the tire tread), bulges, blisters, peeling and/or discoloration could be signs that a tire is overheating,” he said.

Ignoring the signs is not much of an option since heat-damaged tires are more prone to failure, which puts lives and property at greater risk.

“Impact damage can be detrimental to a tire and the likelihood of a catastrophic failure increases when a tire’s intended operating temperature is exceeded,” Finger said.

“Inflation pressure maintenance is always important, but even more so as temperatures rise,” Keating said. “Tires will always generate their own heat, but if the starting point is higher, the end point will be as well.”

“Checking air pressures routinely is the most important thing any fleet can do,” Sena said. “However, they should only be adjusted when the tires have time to cool down and the internal temperature matches the ambient temperature. Typically, this can take 3-4 hours after the unit is parked.”

Under inflation will lead to even higher tire temperatures.

“The biggest heat impact on truck tires is from running under inflated – running with tires inflated below the Load and Inflation Table (L&IT) for that tire,” Garrett said.

Be especially vigilant when checking air pressure on dual tires.

“Keep dual tires within 5 psi of each other,” Garrett explained. “High pressure differences induce torque on the tires and increase the operating temperature.”

If hotter days are in the forecast, step up tire awareness with drivers.

“Maintaining proper inflation pressure is the first line of defense, therefore, extra emphasis should be communicated to drivers about checking air pressure during pre-trip/post-trip inspections when hotter temperatures are forecast,” Finger said.

While running with heavy loads may be fine during cooler months, it’s not always advisable during the hotter time of the year.

“Watch the load – higher loads increase the pressure and potentially the temperature,” Garrett said. “Some fleets will refuse very heavy loads in the summer in Southern states.”

“The TPMS can warn the fleet if a tire is under inflated and provide temperature and recommended psi,” he said. 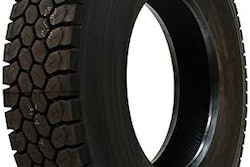 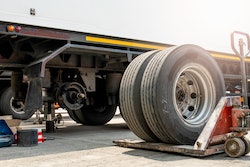