Angel Coker, CCJ senior editor
Jan 16, 2023
The FMCSA does not have specific crash statistics related to bridge strikes, but from 2014 to 2018, 13 people died in crashes in which a large truck has struck a bridge overpass, according to the National Highway Traffic Safety Administration.

A bridge standing 11 feet, 3 inches in Olathe, Kansas, ripped the top off a tractor trailer this past November. Low-bridge collisions are not uncommon; in fact, the Federal Motor Carrier Safety Administration considers bridge strikes a serious safety hazard.

In New York State, which is home to some of the lowest bridges in the nation, 344 low-bridge collisions occurred in 2021, according to the New York Department of Transportation and Thruway Authority; in 2022, 67 bridge strikes occurred across New York City’s boroughs alone, according to the most recent information from the City of New York’s Bridge Strike Data.

[Related: Here’s how to minimize risks of GPS routing]

While it doesn’t collect statistics on the matter, the FMCSA believes bridge strikes are avoidable. That has been proven with the use of different technologies.

“Safety is essential. You don't want to be crashing into anything ever. That's at the top of the list of why it's important. Beyond that is just about pure efficiency,” said Chris Oliver, chief marketing officer at Trucker Path. “If you're routed incorrectly and recognize the truck is too tall to go under a clearance, I'm glad you recognize that and there wasn't a crash. But then you have to figure out how to turn around and take that truck the opposite direction and find a new route. There's a lot of time to be wasted there. By being able to know with confidence that you're avoiding those, you get from point A to point B much more quickly.”

Navigation is a big chunk of what drivers use the Trucker Path app for. The app, which also allows drivers to input their vehicle specs like height, weight and weight limit, uses Here Technologies, which provides the initial feed of bridge heights and low clearances.

“If you say you've got a truck that's 15 feet tall, and you need to go from point A to point B, we make sure that we don't route you under any clearances below 15 feet. That's how it works on the surface; that's straightforward,” said Oliver. “The bad news of that is it's never perfect. So inevitably, at some point, that's not going to work, and it'll be a lower clearance than expected. Could be old bridges where the data is outdated. A bridge used to be 15 feet high, but after a handful of repairs, it’s now 14.5. Things just happen and change over time.

“So what we do is we give the users the ability to give us that feedback,” he said. “That then goes back into our database so that we know that even though our initial data feed said that bridge was 16 feet, we've had users who tell us it's only 14. So then we stop routing people there that are over 14 feet.”

GiraffeG4 Systems also collects that data but via sensor instead of crowdsourcing.

The company offers its Sentinel product, a low-clearance collision avoidance system that leverages a sensor to help large trucks and RVs steer clear of low bridges.

It provides warnings to drivers via mobile app in which the driver inputs the height of the vehicle and trailer ahead of embarking on a trip. The app interacts with the GPS system the driver is using to pre-measure heights based on the GPS’s information.

But that information isn’t always correct, said Frank Nugent, president of GiraffeG4, so the sensor measures the exact height of an obstacle a vehicle is about to pass under and continues to measure the height of the obstacle until the vehicle is safely clear. That data is then automatically entered into the GiraffeG4 database to warn other drivers that take the same route.

FMCSA advises fleets to use GPS navigation systems designed specifically for large trucks to help avoid low clearances. But Oliver said a lot of fleets, especially small operators, use systems like Google Maps that are primarily for passenger cars. While it can route a driver efficiently in terms of time and distance, it doesn’t account for weight limits or bridge heights.

E-SMART is another system designed for fleets with large trucks that takes things a step beyond in-cab alerts and actually slows a truck. Fleets that have integrated E-SMART have experienced a complete elimination of low-clearance bridge hits, according to its users.

“E-SMART has gone in and manually geofenced low bridges that are on routes that are accessible to trucks,” Bement said. “So if our truck crosses that imaginary geofence line, then the system starts taking away the engine’s ability to make power until the truck is safely stopped before it ever gets to that low bridge.”

Nugent said with today's technologies, there is no reason drivers should ever again have to perform a "bump-and-run" where they pull up to a low obstacle very slowly to determine if they can clear it. 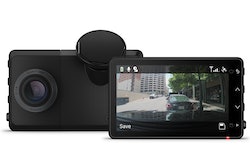 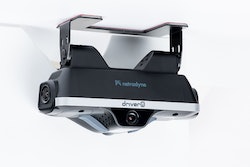 Advertising cameras on board could offset nuclear verdict impacts 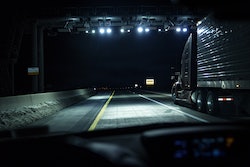