I’ve compiled an annual look back at test drives each of the last four years, but none quite this … let’s just call it unique.

Quarantines, lockdowns and generally unsafe conditions canceled more test drive opportunities than I can count. Heck, Mack re-launched its medium duty line up in February and here I sit 10 months later and still haven’t driven it.

In all, I’m grateful to have gotten some seat time before the onset of the pandemic, and I appreciate the ingenuity, creativity and logistics put in place later in the year that enabled me to continue to do what I love most about this job: driving.

Back in January, before the world went crazy – which feels like a lifetime ago – I was able to ring in the new year with Mack’s electric LR Model. The New York City Department of Sanitation (DSNY) – the largest sanitation department in the world with 6,000-plus trucks collecting more than 12,000 tons of refuse and recyclables daily – is currently putting these models through the paces, but I was able to pace a little myself. As much as I love driving big trucks, driving a garbage truck is a lot of fun. Where else can you stand up while you drive?

Continuing with the theme of electrification, this Volvo VNR Electric was one of the first five units to be built as part of the Low Impact Green Heavy Transport Solution (LIGHTS) partnership and it belonged to DHE. As soon as I hopped out, it was bound for the Los Angeles-area ports. About nine months later, Volvo would announce its plans to start commercial production of the VNR Electric in early 2021.

This next drive actually fell to my colleague, Tom Quimby. It was unique in that it was more about the powertrain than the truck itself. Ford’s new 7.3-liter V8 gas engine and its new third generation 6.7-liter Powerstroke are available in its F-Series Super Duty trucks up to the F-600, a truck which Ford has high hopes for in the commercial segment.

I hopped back into the seat (sorry Tom) in March to test drive Stoneridge’s MirrorEye rearview camera system, a platform that replaces a truck’s conventional mirrors with integrated external digital cameras mounted outside above the cab and digital monitors inside. Mirrors are responsible for approximately 2% of the aerodynamic drag created by a tractor, and MirrorEye sees its system as a problem-solver when it comes to improving fuel efficiency.

This test drive of Ford’s Transit commercial van took place in my hometown. With the world now fully socially distanced, Ford dropped this van off (contactless) at my house. With more carriers eyeing the final mile space, Ford hopes to take a slice out of the commercial trucking pie with the best selling commercial van in the U.S.

New trucks are exciting but when it’s a new truck and a new model, it just adds that extra little ‘zing.’ Western Star spent five years designing and engineering the all-new 49X from the ground up and baked in a lot of technology and driver comfort features that generally aren’t vocational standards. This drive was a lot of fun, and it was difficult. I bounced units through a working rock quarry and did some heavy hauling through the central Oregon mountains and valleys. 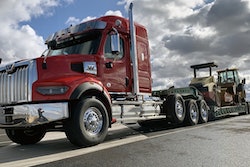 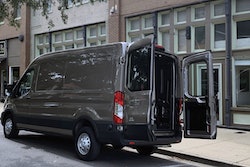 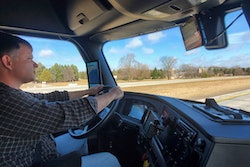