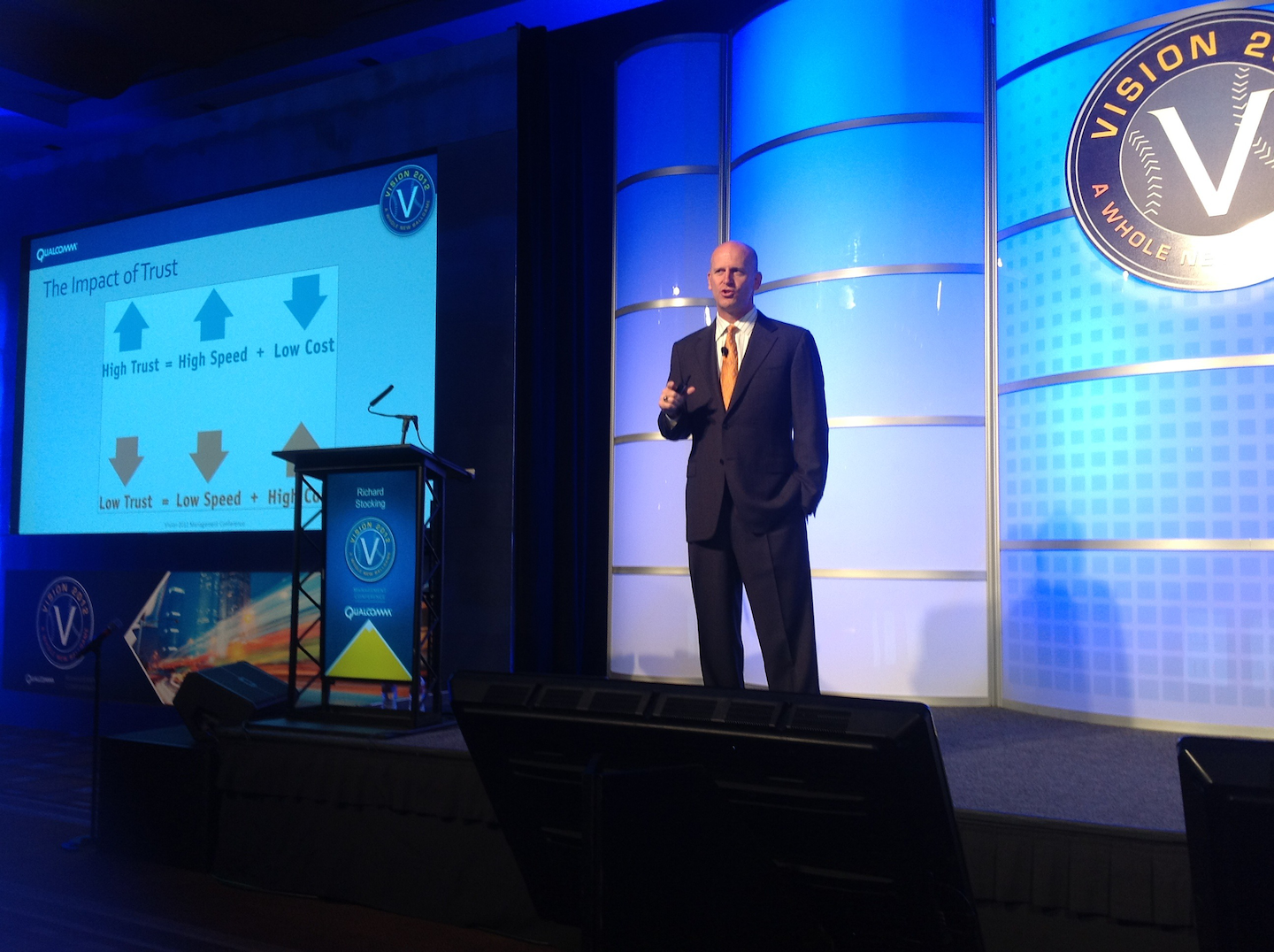 Twenty years ago, Richard Stocking was in Utah. He had just completed a two-year mission for the Church of Jesus Christ of Latter-day Saints and the future looked bright with a new job and fiance. Suddenly his prospects dimmed when both he and his fiancé lost their jobs.

He decided to call Jerry Moyes, the owner of Swift Transportation in Phoenix. Moyes knew Stocking’s mother through a family connection.

“Jerry gave me a chance,” said Stocking during a keynote address at the Qualcomm Vision 2012 user conference in San Diego on June 6.

Stocking started his career at Swift as a customer service representative during a time when Swift was in a fast growth phase. The company had just gone public in 1990 with $156 million in revenue and was exceeding expectations by making a 20 percent in EBIDTA profit.

Stocking’s career flourished. He moved into operations and then sales. In 2007, Moyes purchased a large share of Swift stock and took the company back to private ownership. The company’s investment grade stock became highly leveraged with debt. When the recession climaxed in late 2008, Swift was on the brink of disaster.

“We had lost our way,” he said. “We were prideful, full of ourselves, old and stale. We quit changing. We got lazy. We weren’t very good. We were very close to disaster.”

Out of loyalty to Moyes, Stocking decided to take on the challenge as the new president and COO. “The chips were down for Jerry,” he said. “This was a chance for me to give back. I am committed to preserving Jerry’s legacy. He is someone who would give his life for the industry.”

Fast forward to 2012. Swift, the largest carrier in North America, is coming off its best year in company history for operating ratio and earnings (EBITDA).

During his presentation at Qualcomm Vision 2012, Stockton explained how the business and leadership strategy Swift put in place resulted in one of the most drastic turnarounds the trucking industry has ever seen.

The turnaround came in part by taking out waste and inefficiency in processes, but the main factor was raising the leadership bar, creating a new vision, purpose and strategy to empower people to give their very best.

Having a vision sounds cliché, but Stockton said that for people to give their very best, it is essential they know where you are going to go and why they are doing it. To illustrate his point, he shared a recent, personal experience of how vision can make all the difference.

Stockton recently climbed the highest peak in Colorado, Mt. Elbert. The activity was part of the Soldiers to Summit program, which Swift is a sponsor. Near the summit at 14,500 feet with wind blowing and scant oxygen, Stocking said he was ready to give up when a blind man — a disabled veteran — came by and showed him how to breathe and walk in high altitude. He asked Stocking to dedicate the last piece of the hike to something.

“I didn’t know how to put one more foot in front until I had someone help me and lead me,” he says. “I didn’t think I could get any farther, but that man helped me to see the vision and I was able to will my way to the top.”

Stockton said it is essential for leaders to inspire trust and confidence in people. “When you have high trust, you normally have high speed and low cost.” Leaders must also get organizations to discern between “wildly important goals” (WIGs) and “pretty important goals” (PIGs), and then put systems in place that create a “hyperfocus” and “cadence of accountability” for a company’s WIGs.

Most of the time, he said, organizations tend to spend time on matters that seem urgent — the PIGs—at the expense of losing focus on WIGs. As an example of what Swift has been able to accomplish during the turnaround, Stockton mentioned a WIG to take out $90 million of cost. Swift exceeded this goal by chasing over $250 million of costs out in one year.

“People felt empowered,” he said. “There are experts in the field we need to listen to. We put every idea through the process. People understand we want ideas.”

This year, Swift is focused on increasing utilization and return on net assets. For instance, by improving the time drivers spend driving loaded each week by just 5 hours, the company estimates it could generate an additional 200 million revenue miles per year without adding more equipment.

“Fortunes are not made in the boom times,” he said. “That is merely the collection period.”