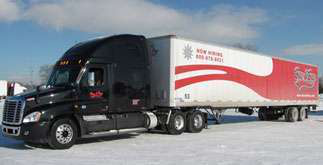 Honolulu was the award trip of choice for Bay & Bay Transportation truck driver Tim Langer. He and his wife enjoyed a weeklong stay there, complete with a tour of the U.S.S. Missouri, a helicopter tour of the islands, a trip to the Polynesian Cultural Center and a whale-watching excursion.

Langer won the trip after being named one of four recipients of Bay & Bay’s annual “Top Dawg” Award. Langer, a company driver who works out of the terminal in Rosemount, Minn., is involved mostly in dedicated freight within the Midwest.

“I’m very proud of these drivers, because the award is based on production, as well as safety,” says Sam Anderson, Bay & Bay president and chief executive officer, who presented the awards at the company’s annual driver banquet at the Sofitel in Minneapolis. “They are true professionals and great role models.”