Amid all the uncertainty in the economy and in presidential politics, Tom McLeod said that at least one thing is certain: the best-run companies today will continue to be the best in the marketplace. McLeod spoke during the opening  session at the company’s user conference held in Birmingham, Ala., on Sept. 17.

“It all comes down to the choices they are making,” he said. And for many transportation companies, the best choice they have made in recent years was to diversify their services. “This is an opportunity and a challenge,” he continued. “If you are prepared, you can take advantage of these opportunities. Resistance to change is going to keep your competitors stuck where they are.”

McLeod pointed to a number of strategic choices his own company has made in response to burgeoning transportation trends. These choices have led to record growth during the past year. The biggest trend has been the number of shippers looking to outsource their transportation management functions. McLeod seized an opportunity in April 2009, to acquire a software system for managing freight bids, load tendering and other steps in the overall capacity procurement process.

“The way we choose to make investments will determine our progress and where we end up,” he said. “We are setting out to supply transportation companies involved in the movement of freight in North America with all the tools they need to be the premier provider of services they need to respond to the demand customers are placing on them.”

At the user conference, McLeod Software announced the availability of its latest version of LoadMaster and Powerbroker enterprise software systems for asset and non-asset transportation companies.

Driver Feasibility is a new decision support system that is included in LoadMaster version 11.1. Accessible within the load planning screen, the feature gives users, such as customer service managers, an instant “sanity check” of a chosen driver-load combination. Using linear programming techniques, the system checks the feasibility of a load based on the driver’s current hours-of-service, location, load status and future availability. 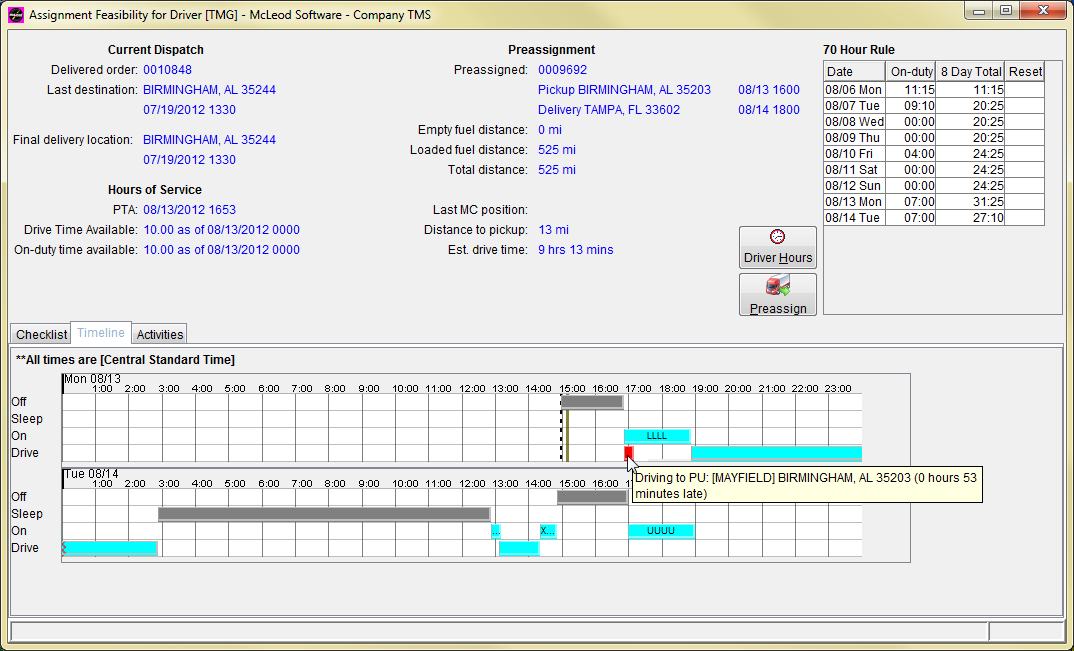 “The idea is to allow customer service people to take a driver and anticipate if they are able to take an assignment based on a number of factors,” says Robert Brothers, director of product development.

“The system walks you through the logic,” McLeod adds, by showing users where the danger zones are in a driver’s schedule on a graphical timeline.

In the first quarter of 2013, McLeod plans to release a visual workflow product to allow users to define custom workflows in their system. Users can produce new workflows without having to pay for custom programming. “It is a very powerful product that we believe will be a game changer for the way you run operations,” he said.

McLeod also is building new scorecard functionality into its business intelligence (BI) framework. Business owners and managers can marry up their strategic planning with day-to-day execution by choosing what metrics to monitor and then comparing planned versus actual performance over time.

Another soon-to-be released product from McLeod is a customer relationship management (CRM) system. The new CRM will have seamless integration to LoadMaster and PowerBroker to move customers through the sales cycle with all financial, load activity and other information accessible in one place.

“Companies who are experiencing the most growth are those with a well-trained, experienced sales force,” McLeod said.

Finally, McLeod is developing computer telephony integration. The integration platform will trigger a pop-up screen of information for all incoming calls. Users will see who is calling and be given a pre-queried set of information that the caller will likely be asking for. When a customer calls, for instance, users could quickly access orders, quotes, and billing history. When a driver calls, the system pre-queries current dispatch and location information. The tool allows users to “take out some of the reaction mode,” Brothers says.