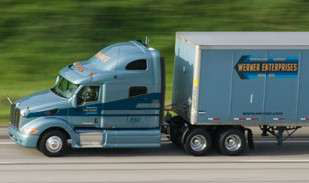 Due to softer freight demand, rising fuel prices and other cost increases that outpaced rate increases, Omaha, Neb.-based Werner Enterprises said in its third quarter report that it had a 15 percent year-over-year decline in both earnings per diluted share and net income. Its net income in the quarter was $25,128, compared to 2011’s third quarter of $29,578.

The company says in its report that freight demand in the quarter did not show “normal seasonal improvement from mid-August through September; in contrast, we experienced seasonal strengthening in demand during the same period in third quarter 2011. In third quarter 2012, our customers generally chose to keep their inventory levels leaner in a market with economic and political uncertainty. Freight trends for October 2012 to date have continued to trend below levels for the same period in 2011.”