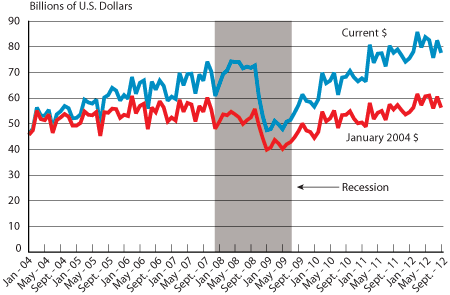 Trade between the United States and its North American Free Trade Agreement partners — Mexico and Canada — was 0.1 percent lower in September 2012 than in September 2011, according to a report from the Department of Transportation’s Bureau of Transportation Statistics. NAFTA surface trade for the month totalled $77.7 billion, unadjusted for inflation, the report says.

These numbers mark the first year-over-year decrease since November 2009. Adjusted for inflation and exchange rates, however, BTS says the September 2012 total was up 1.4 percent from September 2011, totaling $56.3 billion in 2004-value dollars.

BTS says the September 2012 NAFTA surface trade value represents a 35.6 increase from September 2009 — the end of the last recession.